📚 Chapter = 5 📚
👉 Minerals and Energy Resources 👈
❇️ Minerals :-
🔹 Mineral as a "homogenous, naturally occurring substance with a definable internal structure.
🔹These are found in varied forms in nature, ranging from the hardest diamond to the softest talc.
❇️ Rock :-
🔹 A rock is an aggregate of one or more minerals but without definite composition of a constituent of mineral.
❇️ Mode of Occurrence of Minerals :-
Minerals are usually found in 'ores'.
🔹 The accumulation of any mineral mixed with other elements is called ore.
❇️ Ores :-
🔹 Rocks from which minerals are mined are known as ores. Although more than 2,800 types of minerals have been identified, only about 100 are considered ore minerals.
❇️  Minerals generally occur in these forms :-
🔹 In igneous and metamorphic rocks minerals may occur in the cracks, crevices, faults or joints. The smaller occurrences are called veins and the larger are called lodes. Example: tin, copper, zinc and lead etc.
🔹 In sedimentary rocks, a number of minerals occur in beds or layers. Example: Coal, iron, gypsum, potash salt, sodium salt etc.
🔹 Minerals also found in the decomposition of surface rocks, and the removal of soluble constituents, leaving a residual mass of weathered material containing ores. Example: Bauxite. 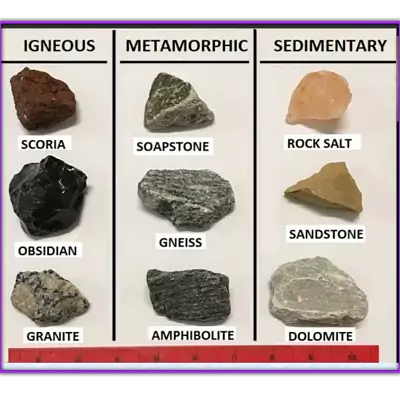 🔹 Minerals may occur as alluvial deposits in sands of valley floors and the base of hills known as 'placer deposits". Example: Gold, silver, tin and platinum etc.
🔹 The ocean waters contain vast quantities of minerals. Example: Common salt, magnesium and bromine etc.