CBSE Revision Notes for CBSE Class 10 Social Science POL Power sharing POL Power sharing: Why and how is power shared in democracies?, To what extent has decentralisation achievedthis objective? How does democracy accommodate different social groups?

📚 Chapter = 1 📚
👉 Power sharing 👈
❇️ 'Ethnic':-
🔹 Ethnic means a social division based on shared culture and common descent. People belonging to an ethnic group need not have the same religion or nationality.
❇️ Majoritarianism :-
🔹 A belief that the majority community should be able to rule a country in whichever way it wants, by disregarding the wishes and needs of the minority is majoritarianism.
❇️ What is Power :-
🔹 Sharing Power Sharing is a political arrangement to share the powers at different levels.
🔹 idea so that the power is not concentrated in one hand and that different forms can also keep a check on one another.
🔹 Separation of powers between the legislature, the executive and the judiciary.
❇️ Features of power sharing :-
🔹 Coalition government in which different parties can participate.
🔹 Protection of minority groups.
🔹 Decentralisation of powers.
🔹 Decision making by consensus.
❇️ Case study of Belgium and Sri Lanka :- 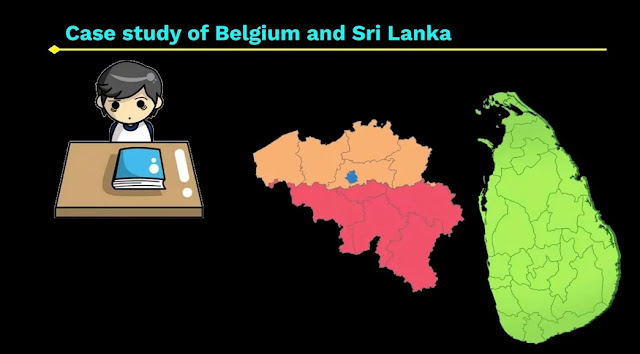 ❇️ Belgium and Sri Lanka :-
🔹 Belgium is a small country in Europe.
🔹 It has borders with Netherlands, France and Germany.
🔹 59% in the Flemish region speaks Dutch.
🔹 Another 40% people live in Wallonia region and speaks French.
🔹 Remaining 1% of the Belgians speak Germany.
🔹 In the capital city Brussels, 80% people speak French while 20% are Dutch - speaking.
🔹 The minority French - speaking community was relatively rich and powerful.
🔹 This was resented by the Dutch-speaking community who got the benefit of the economic development and education much later.
🔹The tension between two communities was acuter in Brussels.
🔹 Like other nations in the south Asia region, Sri Lanka has a diverse population.
🔹 The Sinhala speaks are 74% and Tamil speakers are 18%
🔹 Among Tamils, there are two sub groups, Tamil natives of the country are called "Sri Lankan Tamils"; the rest whose forefathers came from India as a population workers during the colonial period, is called Indian Tamils'.
❇️ Considering Belgium :-
🔹 Small country in Europe.
🔹 Borders with France, the Netherlands, Germany and Luxembourg.
✴️ Two regions:
🔹 Flemish and Wallonia
✴️ Dutch :- speaking: 59% :Flemish region (majority)
✴️ French :- speaking: 40% : Wallonia region (minority)
✴️ German :- speaking remaining 1%
✴️  Capital of Belgium :- Brussels
✴️ French :- speaking: 80% (majority)
✴️ Dutch :- speaking: 20% (minority)
❇️ Considering Belgium : Reasons of tension in Belgium :-
🔹 French community was relatively rich and powerful than Dutch community.
🔹 Dutch community was in majority in the whole county but minority in the capital.
🔹 Tensions between both communities during the 1950's and 1960's.
🔹 Recognising the differences of regional and cultural diversities, they amended their constitution four times.
🔹 Following are the elements of the Belgian model:
🔹 Dutch and French speaking leaders had to be equal in number in the Central government.
🔹 Power was given to the state government.
🔹 Brussels had a separate government in which there were equal number of representatives from both the communities.
❇️ Accommodation in Belgium : Community government was the third kind of government :-
🔹 Elected by people belonging to one language community.
🔹 This government has powers regarding cultural, educational and language-related issues.
❇️ Complicated yet successful model BELGIUM :-
🔹 This system helped in avoiding civic strife among the communities.
🔹 Helped in a possible division of the country on linguistic lines.
🔹 Brussels, capital city of Belgium was chosen as the headquarters of the European Union.
❇️ Considering SriLanka :-
🔹 Island nation
🔹 Lies on the southern coast of Tamil Nadu
🔹 Sinhala - speaking :74% - Buddhists
🔹 Tamil speaking : 18% - Hindus or Muslims
🔹 Both Tamil and Sinhala speaking Christians : 7%
❇️ Considering Majoritarianism in Sri Lanka :-
🔹 Emerged as an independent country in 1948.
🔹 Sinhala community attained dominance over the government.
🔹 Hence, adopted a series of Majoritarian measures to establish Sinhala Supremacy.
❇️ Changes in Sri Lanka :-
🔹 In 1956, an Act was passed which recognised only Sinhala language, disregarding Tamil.
🔹 Followed preferential policies that favoured the Sinhala.
🔹 Favoured Sinhala applicants for university positions and government jobs.
🔹 Protected and fostered Buddhism.
🔹 This increased the feeling of alienation among the Sri Lankan Tamils.
❇️ Tamil community was infuriated :-
🔹 Tamils launched parties and struggles for the recognition of Tamil as an official language.
🔹 Demanded equality of opportunities in securing education and jobs.
🔹 independent Tamil Eelam (state)
🔹 Demands were denied.
❇️ Civil War :-
🔹 The relations between Sinhala and Tamil were strained and ended with the Civil War.
🔹 Thousands of people from both the communities were killed.
🔹 Many families were asked to leave the country as refugees.
🔹 Many lost their livelihoods.
🔹 It caused a major setback to the Srilankan economy.
❇️ Why is power sharing desirable?
✴️ Prudential reason :- It helps to reduce the possibility of conflicts between the social groups.
✴️ Moral reason :- Good way to ensure the stability of the political order Power Sharing is the Spirit of Democracy.
❇️ Principles of a good democracy :-
🔹 that power of a government must not vest in one person or a group of persons.
🔹 that people are the source of all political power.
🔹 that due respect be given to diverse groups and everyone should have a voice in the shaping of public policies.
❇️ System of checks an of balances :-
🔹 The horizontal distribution of power ensures that power is shared among different organs of government-the legislature, executive and judiciary. It allows different organs of government placed at the same level to exercise different powers. In a democracy, ministers and government officials exercise power. They are responsible to the Parliament or State Assemblies. The judges appointed by the executive can check the functioning of executive or laws made by the legislature. The horizontal distribution of power is also called a system of checks and balances.
❇️ Power-sharing in contemporary democracies :-
🔹 In contemporary democracies, power-sharing takes the form of competition among different parties. Such competition ensures that power does not remain in one hand and is shared among different political parties representing different social groups and ideologies. This type of sharing often leads to the formation of an alliance between two or more parties, which, goes to form a Coalition Government.
❇️ Forms of Power Sharing :-
👉 Among different organs of government.
👉 Among governments at different levels.
👉 Among different social groups.
👉 By the way of political parties, pressure groups and movements.
❇️ Among different organs of the government :-
🔹 Legislative, Executive and Judiciary.
🔹 Horizontal distribution of power.
🔹 None has unlimited powers, one checks the other.
🔹 Balanced.
🔹 Also called a system of Checks and Balance.
❇️ Among governments at Different levels :-
🔹 Central, state and local government.
🔹 Vertical distribution of power.
🔹Federal government .
❇️ Among Different Social Groups :-
🔹 Religious and linguistic groups.
🔹 Reserved constituencies are represented in legislatures and administration.
🔹 Favourable for the minority communities as well.
❇️ By the way of Political Parties, Pressure Groups & Movements :-
🔹 In the longer run, power is shared amongst different political parties or social groups so formed.
🔹 Direct or coalition government.
🔹 Interest groups- traders, industrialists, farmers.
Labels:
10classcivics
Share: