CBSE Revision Notes for CBSE Class 10 Social Science POL Power sharing POL Power sharing: Why and how is power shared in democracies?, To what extent has decentralisation achievedthis objective? How does democracy accommodate different social groups?

📚 Chapter = 2 📚
👉 Federalism 👈
🔹 In the previous chapter, we noted that vertical division of power among different levels of government is one of the major forms of power sharing.
🔹 In this chapter, we focus on this form of power sharing. It most commonly referred to as federalism.
🔹 We begin by describing federalism in general terms. The rest of the chapter tries to understand the theory and practice of federalism in India.
🔹 Towards the end of the chapter, we turn to the local government, a new and the third tier of Indian federalism.
❇️ Federalism :-
🔹 Federalism is a system of government in which the power is divided between a central authority and various constituent units.
🔹 [Two or more than two tiers]
❇️ The Key features of Federalism :-
🔹 There are two or more levels (or tiers) of government.
🔹 Different tiers of government govern the same citizens, but each tier has its own JURISDICTION in specific matters of legislation, taxation and administration.
🔹 The jurisdictions of the respective levels or tiers of government are specified in the constitution. So the existence and authority of each tier of gover nment is constitutionally guaranteed .
🔹 The fundamental provisions of the constitution cannot be unilaterally changed by one level of government. Such changes require the consent of both the levels of government.
🔹 Courts have the power to interpret the constitution and the powers of different levels of government. The highest court acts as an umpire if disputes arise between different levels of government in the exercise of their respective powers.
🔹 Sources of revenue for each level of government are clearly specified to ensure its financial autonomy.
🔹 The federal system thus has dual objectives: to safeguard and promote unity of the country, while at the same time accommodate regional diversity.
❇️ Objectives Federal :-
🔹 Federal system has dual objectives:-
👉 To accomodate regional diversity.
👉 To safeguard and promote unity of country.
❇️ TWO CRUCIAL ASPECTS OF AN IDEAL FEDERALISM :-
🔹 Governments at different levels should agree to some rules of power sharing.
🔹 Trust and agreement to live together must be there.
❇️ Types of Federalion :-
✴️ Coming Together :-
🔹 The first route involves independent States coming together on their own to form a bigger unit, so that by pooling sovereignty and retaining identity they can increase their security. This type of 'coming together' federations include the USA, Switzerland and Australia.
✴️ Holding Together :-
🔹 The second route is where a large country decides to divide its power between the constituent States and the national government. India, Spain and Belgium are examples of this kind of 'holding together' federations.
❇️ What has made India a Federal Country?
🔹 Constitution has declared India as a Union of States.
🔹 Three tier Federalism- Union, State and Panchayat.
🔹 Three fold distribution of legislative powers under Union list, State list and Concurrent list.
🔹 All states in India Unions do not have identical powers. E.g. union territories.
🔹Changes in power sharing has to be passed by two-third majority in the parliament.
🔹 In case of any dispute regarding division of power, the apex court will take decision.
❇️ Three Gold Distribution Of LEGISLATIVE POWER :-
✴️ Union List :-
🔹 Union List includes subjects of national importance such as defence of the country, foreign affairs, banking, communications and currency.
🔹 They are included in this list because we need a uniform policy on these matters throughout the country.
🔹 The Union Government alone can make laws relating to the subjects mentioned in the Union List.
✴️ State List :-
🔹 State List contains subjects of State and local importance such as police, trade, commerce, agriculture and irrigation.
🔹 The State Governments alone can make laws relating to the subjects mentioned in the State List.
✴️ Concurrent List :-
🔹 Concurrent List includes subjects of common interest to both the Union Government as well as the State Governments, such as education, forest, trade unions, marriage, adoption and succession.
🔹 Both the Union as well as the State Governments can make laws on the subjects mentioned in this list.
🔹 If their laws conflict with each other, the law made by the Union Government will prevail. 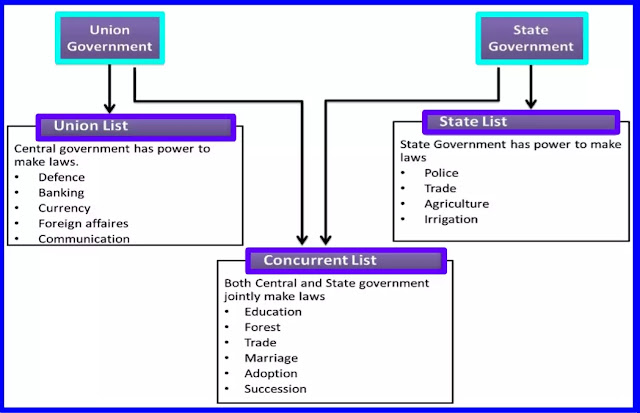 ❇️ HOW DOES INDIA PRACTICE FEDERALISM?
🔹 Constitutional provisions are necessary for the success of federalism but these are not sufficient.
🔹The real success of federalism in India can be attributed to the nature of democracy.
✴️ politics in our country:-
👉 LINGUISTIC STATES
👉  LANGUAGE POLICY
👉 CENTRE-STATE RELATION
❇️ Linguistic States :-
🔹 In 1947, the boundaries of several old States of India were changed in order to create new States. This was done to ensure that people who spoke the same language lived in the same State.
🔹 Some States were created not on the basis of language but to recognise differences based on culture, ethnicity or geography. These include States like Nagaland, Uttarakhand and Jharkhand.
🔹 When the demand for the formation of States on the basis of language was raised, some national leaders feared that it would lead to the disintegration of the country.
🔹 The Central Government resisted linguistic States for some time. But the experience has shown that the formation of linguistic States has actually made the country, more united. It has also made administration easier.
❇️ Language policy :-
🔹 Our Constitution did not give the status of national language to any one language.
🔹 According to the Constitution, the use of English for official purposes was to stop in 1965. However, many non Hindi speaking States demanded that the use of English continue.
🔹 In Tamil Nadu, this movement took a violent for m. The Central Government responded by agreeing to continue the use of English along with Hindi for official purposes.
🔹  Hindi was identified as the official language. But Hindi is the mother tongue of only about 40 per cent of Indians.
🔹 But besides Hindi, there are 21 other languages recognised as Scheduled Languages by the Constitution.
🔹 States too have their own official languages.
❇️ Centre-State Relations :-
🔹 For a long time, the same party ruled both at the Centre and in most of the States. This meant that the State governments did not exercise their rights as autonomous federal units. As and when the ruling party at the State level was different, the parties that ruled at the Centre tried to undermine the power of the States. In those days, the Central Government would often misuse the Constitution to dismiss the State governments that were controlled by rival parties.
🔹 All this changed significantly after 1990. This period saw the rise of regional political parties in many States of the country.
🔹 This was also the beginning of the era of COALITION G OVERNMENTS at the Centre. Since no single party got a clear majority in the Lok Sabha, the major national parties had to enter into an alliance with many parties including several regional parties to form a government at the Centre.
🔹 This trend was supported by a major judgement of the Supreme Court that made it difficult for the Central Government to dismiss state governments in an arbitrary manner.
📚 At least one-third of all positions are reserved for women.
📚 An independent institution called the State Election Commission has been created in each State to conduct panchayat and municipal elections.
📚 The State governments are required to share some powers and revenue with local government bodies. The nature of sharing varies from State to State.
❇️ Decentralisation in India :-
👉 Meaning ➡️ Need
🔹 When power is taken away from central and state government and given to local government, it is called decentralisation.
❇️ The major step towards decentralisation was taken 1992.
🔹 Constitutionally mandatory to hold regular elections to local government bodies.
🔹 Reservation of seats for SC, ST and OBCS.
🔹 At least one-third of all position are reserved for women.
🔹 Creation of state election commision.
🔹 The state governments are required to share some power and revenue with local government bodies.
Structure of the new Panchayati Raj institutions: Rural Local Government is known by the name of Panchayati Raj.
🔹 Each village or group of villages has a Gram Panchayat. Panch, President or Sarpanch are directly elected by all the adult population of the village and is the decision-making body.
🔹 The Panchayat works under the supervision of Gram Sabha, with all the voters as its members. The local structure goes up to the district level-a group of Gram Panchayats form a Panchayat Samiti or Block or Mandal. All the Panchayat Samitis or Mandals together constitute the Zilla Parishad which consists of elected members.
🔹  Lok Sabha members, Local MLAS and officers are also members of the Zilla Parishad. Its Chairperson is the political head of the Parishad.
❇️ Urban areas local bodies :-
🔹 Municipalities are set up in towns. Big cities are constituted into Municipal Corporations. Both are controlled by elected bodies consisting of people's representatives. Municipal chairperson is the political head of the Municipality. The head of Municipal Corporation is an officer called the Mayor.
❇️ The Local Government Structure or Village Level :-
✴️ Gram Panchyat :- Each village or group of village in some states has a gram Panchayat. This is a council consisitng of several members often called Panch and a president or sarpanch. They are directly elected by the adult population of ward.
✴️ Panchayat Samiti / Block Samiti :- A few Gram Panchayat are grouped together to form what is usually called a Panchayat or Block or Mandat Samiti the member of this represintaitive body are elected by all the panchayat memebrs in that area.
✴️ Zila Parishad :- All the Panchayat Samiti and Mandals in a district together constitute the Zila Parishad. Most of the mebers of Zila Parishad are elected.
✴️ Zila Parishad :- Members of loksabha + MLA's of that district & some other officials of other district level.
🔹 Chairperson is the political head of Zila Parishad
Labels:
10classcivics
Share: