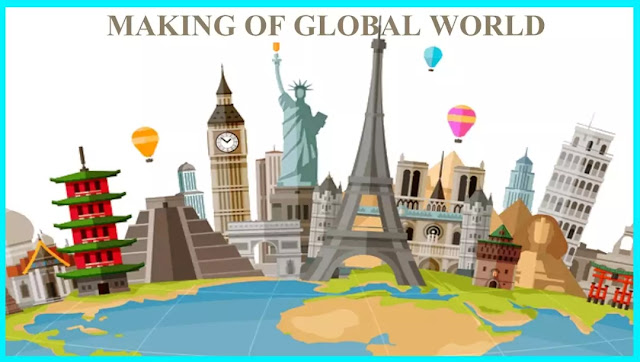 📚 chapter 3 📚
👉 THE MAKING OF A GLOBAL WORLD 👈
❇️ INTRODUCTION :-
🔹 Globalization means integration of markets in the global economy, leading to the increased interconnections of economies .
🔹 It is an economic system that has become a buzzword since the last 50 years or so.
🔹 It is about economics or trade, technology, politics, and culture.
❇️ THE PRE-MODERN WORLD :-
"The making of the global world has a long history."
🔹 Human societies have become steadily more interlinked.
🔹 Travelers, Traders, priest and pilgrims travelled vast distance.
🔹 They carried goods, money, values, skills, ideas, inventions and even germs and diseases.
🔹 An active coastal trade linked the Indus valley civilizations with present day West Asia, even as early as 3000 BCE.
🔹 Cowries or sea shells were used as a form of currency.
❇️ Silk routes :-
🔹 The 'silk routes' points to the importance of West-bound Chinese silk cargoes along this route. Historians have identified several silk routes, over land and by sea, knitting together vast regions Asia, and linking Asia with Europe and northern Africa.
❇️  Food Travels : Spaghetti and Potato
🔹 Traders and Travelers introduced new crops to the lands they traveled.
🔹 Noodles traveled west from China to become spaghetti.
🔹 Arab traders took pasta to fifth-century Sicily (Italy).
🔹 Potatoes, soya, maize, groundnuts, tomatoes, chillies introduced in Europe and Asia after America was discovered.
🔹 Europe's poor began to eat better and live longer with the introduction of the humble potato. When discase destroyed the potato crop in the mid-1840s in Ireland, hundreds of thousands died of starvation. 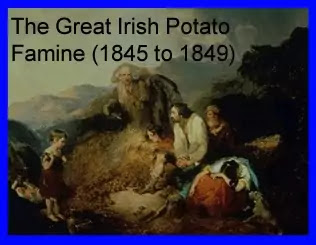 ❇️ Conquest, Disease and Trade :-
🔹 In 16th century after European sailors found a sea route to Asia and America.
🔹 The Indian subcontinent had been known for bustling trade with goods, people, customs and knowledge. It was a crucial point in their trade network.
🔹 After the discovery of America, its vast lands and abundant crops and minerals began to transform trade and lives every where.
🔹 Precious metals, particularly silver from mines located in Peru and Maxico enhanced Europe's wealth and financed its trade with Asia.
🔹 The Portuguese and Spanish conquest and colonisation of America was under way.
🔹 The most powerful weapon of the Spanish conquerors was not a conventional military weapon but germs of small pax which they carried.
🔹 America's original inhabitants had no immunity against such type of diseases.
❇️  A World Economy Takes Shape :-
🔹 Abolition of the Corn law.
🔹 Under pressure from landowners groups the government restricted the import of food grains.
🔹 After the carn laws were scrapped, food could be imported into Britain more cheaply than it could be produced in the country.
🔹 British farmers were unable to compete with imports. Vast areas of land were left uncultivated.
🔹 As food prices fell, consumption in Britain rose.
🔹 Faster industrial growth in Britain led to higher incomes and more food imports.
✳️ FIRST WORLD WAR :-
🔹  The First World War (1914-18) was mainly fought in Europe. But its impact was felt around the world. It lasted more than four years.
✳️ The Central Powers Vs The Allied Powers :-
✴️ Central Power :-
🔹Germany
🔹 Austria-Hungary
🔹 Bulgaria
🔹 Ottoman Empire
✴️ Allied Power :-
🔹 Great Britain
🔹 France
🔹 Russia
🔹 Serbia
🔹 Italy
🔹 The United States
❇️  Corn Law :-
🔹 Under pressure from landed groups, the British government restricted the import of corn. The laws allowing the government to do this were commonly known as the 'Corn Laws'.
❇️  The role of Technology :-
🔹 Technology had a great impact on the transformation of 19th century world such as Railways, steamship and telegraph.
🔹 Technological advances were often the results of social, political and economic factors.
🔹 The refrigerated ships greatly helped to transport the perishable food items over a long distance.
🔹 It greatly facilitated the shipment of frozen meat from America, Australia Or New Zealand to different European Countries.
🔹 The Nineteenth Century (1815 to 1914) In the 19th Century, Economic, Political, Social, Cultural and technological factors interacted in complex ways to transform societies and reshape external relations.
❇️  Indentured Labour Migration from India : Meaning of Indentured Labour
🔹 Indentured labour means a bonded labourer under contract to work for an employer for a specific amount of time.
🔹 It brought higher income for some and poverty for others.
❇️ Rinderpest Plague :-
🔹 Rinderpest is a fast spreading cattle plague which hit Africa in the late 1880s.
❇️ Bretton Woods :-
🔹 Bretton Woods is the name of Hotel in USA where the National Monetary and Financial confrance held in 1944 to ensure the stable economy.
❇️ Flow of Goods :-
🔹 Trade in goods such as grain and cloth.
❇️ Flow of Labour :-
🔹 Migration of people to new areas in search of work.
❇️ Causes of Migration of Indian Indentured Workers :-
🔹 Most came from the present day regions of eastern Utter Pradesh, Bihar, Central India and Tamil Nadu.
🔹 These regions of India experienced many social changes like cottage industry declined, land rents rose and the lands were cleared for mines and plantation.
🔹 In 19th century indenture described as a new system of slavery.
Hosay, A riotous carnival in Trinidad when workers of all races and religions join in celebrating.

❇️ Hosay :-
🔹 Trinidad the annual Muharram procession was transformed into a riotous carnival called 'Hosay' (for Imam Hussain) in which workers of all races and religions joined.
❇️  The Inter War Economic :-
🔹 The first World war was mainly fought in Europe.
🔹 During this time, the world experienced economic, political instability and another miserable war.
🔹 The first world war was fought between tow power bloc. On one were the allies Britan, France, Russia and later joined the US. and on the opposite side -Germany, Austria, Hungary and Ottoman and Turkey.
🔹 this war lasted for 4 years.

❇️ Technological Transformations :-
🔹 First-time modern weapons like Machine gun, tanks, aircraft, chemical weapons etc were used on a massive scale.
🔹 Millions of soldiers had to be recruited from around the world. and most of them were men of working age.
❇️ Bretton Woods Institutions :-
🔹 To deal with external surpluses and deficits a conference was held in July 1944 at Bretton woods in New Hampshire, U.S.A.
🔹 International Monetary Fund and World Bank were set up to finance post war restructuring.
🔹 The past war international economic system is known as Bretton Woods systems.
🔹 This system was based on fixed exchange rates.
🔹 IMF and World Bank are referred as Bretton Woods Twins.
🔹 U.S has an effective right of veto over key IMF and World Bank.
❇️ The Great depression : Factors responsible for depression :-
🔹 Agricultural overproduction remained a problem. It makes the price of agriculture products slumping.
🔹 Many countries financed their investment through the loan they got from the USA.
🔹 American capitalists stopped all loans to European countries.
🔹 In Europe, it led to a failure of some major banks and collapse of currencies like Sterling.
🔹 Doubling the import duties by the USA, which hit the world trade badly.
❇️ INDIA AND GREAT DEPRESSION :-
🔹  Immediately affected Indian trade.
🔹 Prices in India too plunged.
🔹 Peasants and farmers were worst hit.
❇️ Second World War :-
👉  1 Sep 1939 -2 Sep 1945 👈
🔹 The Second World War broke out a mere two decades after the end of the First World War.
🔹 It was a war waged for six years on many fronts, in many places, over land, on sea, in the air.
🔹3 per cent of the world's 1939 population died.
✴️ Axis powers :-
🔹 Nazi Germany
🔹  Japan
🔹  Italy
✴️ Allies :-
🔹 Britain
🔹 France
🔹 Soviet Union and the US
❇️  New International Economic Order : NIEO :-
🔹 Most developing countries did not benefit from the fast growth of Western economies in 1950's & 60's.
🔹 They organised themselves as a group. The group of 77 or G-77 to demand a New International Economic Order (NIEO).
🔹 It was a system that would give them real control over their natural resources more development assistance, fairer prices for raw materials and better access for their manufactured goods in developed countries markets.
❇️ G-77 :-
🔹 G-77 was a group organized by developing countries to demand a New International Economical Order (NIEO) which would give these countries real control over their national resources, raw material. manufactured goods and their markets.
❇️ Veto :-
🔹 A constitutional right to reject a decision or proposal made by a law making body.
❇️ Tariff :-
🔹 Tax imposed on a country's imports from the rest of the world. Tariffs are levied at the point of entry, i.e., at the border or the airport.
❇️ Exchange Rates :-
🔹 They link national currencies for purposes of international trade. There are broadly two kinds of exchange rates: fixed exchange rate and floating exchange rate.
❇️  New Economic Policy In China :-
🔹 Wages were very low in countries like China.
🔹 The low-cost structure of Chinese economy made its products cheaper.
🔹 China became a favourite destination for MNCS to invest.
🔹 New Economic policy of China back into the fold of world Economy.