🔹 Discovery of Neutrons (By J. Chadwick)

▶ Some of the Atomic Model

▶ Observations made by Rutherford in his experiment

▶ Conclusions made by rutherford

▶ Assumptions made by Neil Bohr

🔹 Ditribution of Electrons in Various shells

🔹 John Dalton considered atom to be an indivisible entity, but his concept had to be discarded at the top of nineteenth century, when scientists through experiments were ready to find existence of charged (electrons and protons) and neutral particles (neutrons) within the atom. These particles were called the ‘Sub-atomic Particles’.

(As calculated by Robert E. Millikan)

🔹 E. Goldstein by his famous anode rays/canal rays experiment was ready to detect presence of charged particles called protons within the atom.

🔹 J. Chadwick bombarded lighter elements (like lithium, boron etc.) with α-particles and observed emission of new particles having zero charge but having mass equal to that of proton.

🔹These particles were called ‘Neutron’ i.e. , neutral particle of the atom.

🔹 Neutron are absent in Protium isotope of hydrogen atom.(1H¹)

🔹 Since, mass of electrons are negligible as compared to that of proton and neutrons hence, sum of masses of protons and neutrons in an atom will compose its atomic mass.

🔹 From the knowledge of existence of subatomic particles like electron, proton and neutron in an atom, various atomic models were proposed by different scientists.

✔ Some of the atomic models :-

🔹 The most trusted and scientifically established model of atom which is adopted these days is ‘Quantum Mechanical Model of Atom’. It will be dealt in higher classes.

🔹 This model is often called the ‘Water Melon Model’.

🔹 In this model, Thomson predicted the presence of electrons inside positive sphere (made up of protons), just same as seeds of watermelon are embedded in red edible part of watermelon. 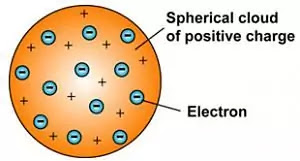 🔹 Although this model explained neutrality of atom but couldn’t able to explain other scientific experiments conducted on atom. Hence it was discarded.

✔ Observations made by Rutherford in his experiment :-

▶ (a) Most of the α – particles passed with none hindrance.

▶ (b) Some of the α – particles deflected from their original path at a clear angle.

▶ (c) Only a few of the α – particles bounced back at their original path. 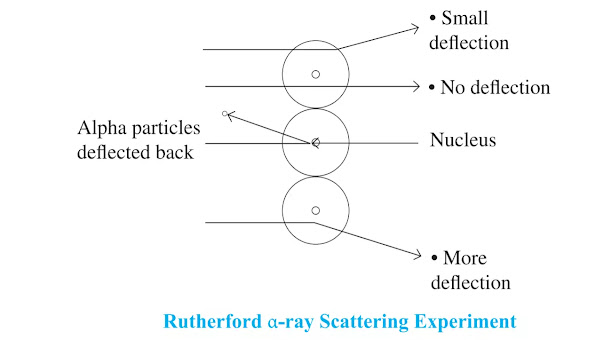 ✔ Conclusions made by Rutherford :-

🔹(i) Atom consists of predominantly empty space as most of α-particles passed through gold foil      undeflected.

🔹(iii) Since a minute fraction of α-particles suffered deflections and very few bounced back, this lead to conclusion that most of the space an atom is empty and the space occupied by nucleus is negligible compared to this empty space.

( Size of nucleus was about 10⁻⁵ times that of size of atom. )

🔹(iv) Whole of the atomic mass concentrated in the nucleus.

🔹(i) There is positively placed nucleus in an atom. Nearly all the mass resides in nucleus (Proton + Neutron).

🔹(ii) Electrons revolves round the nucleus in well defined orbits.

🔹(iii) Size of nucleus is very small compared to the size of atom.

🔹According to Rutherford, electrons revolve round the nucleus in well-defined orbits, but electrons being charged particles will lose their energy and finally will fall into the nucleus.

🔹This will make atom highly unstable.

🔹This was the major drawback of Rutherford which was unexplained by him. 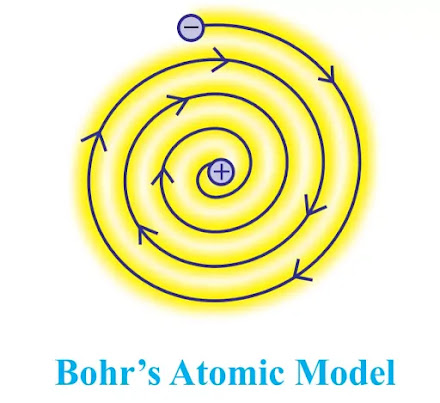 🔹To overcome drawbacks of Rutherford’s Model, Neil Bohr in 1912 proposed modified model of structure of atom.

✔ Assumptions made by Neil Bohr :-

🔹Only certain special orbits known as discrete orbits of electrons are allowed inside the atom.

🔹While revolving in discrete orbits, the electrons do not radiate energy.

🔹Energy is emitted or absorbed by an atom only when an electron moves from one orbit to another.

This model of atom states that :-

🔹An atom consists of heavy charged nucleus. the entire mass of the atom is concentrated within the nucleus.

🔹The electrons in an atom revolve round the nucleus in definite circular paths called orbits or energy state .

🔹Each energy state is related to definite amount of energy.

🔹The total number of proton lying in the nucleus of any atom is called the atomic number.

🔹Atomic number is denoted by ‘Z’.

🔹It is the sum of total number of protons and no. of neutrons lying in the nucleus of an atom.

🔹Mass number = no. of protons + no. neutrons

🔹Representation of an atom: zEᵃ or ᵃzE (E= symbol of an element)

Example:- Calculate number of protons, electrons and neutrons for ₁₇Cl³⁵ or ³⁵₁₇Cl

Since Cl is neutral,

✔ Distribution Of Electrons In Various Shells :-

🔹The distribution of electrons in various shells is done in accordance to ‘Bohr-Bury Scheme’.

This scheme can be summarized as follows :-

🔹(i) The filling of electrons in an atom is done in accordance to ‘2n²’, where ‘n’ is the number of shell and ‘2n²’ represents the total number of electrons that can be accommodated in that particular shell.

▶ Maximum number of electrons that can be filled in particular shell.

Example: ‘Ca₂₀’, the electron distribution will be :

🔹From Bohr-Bury sequence, we know that maximum number of electrons which can be accommodated in outermost shell is 8.

🔹Every element has an urge to have 8 electrons in its outermost shell, in achieving 8 electrons an atom can either gain electrons or loose electrons.

🔹The number of electrons lost or gained by an element in achieving 8 electrons in its outermost shell will be called its Valence. 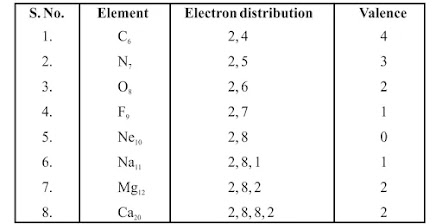 Example:- Chlorine has two isotopes of mass numbers 35 and 37 respectively.

🔹 (i) Uranium isotope is used as fuel in nuclear rector.

🔹 (ii) Isotope of cobalt is useful in treatment of cancer.

🔹 (iii) An isotope of iodine is used in the treatment of goiter.

🔹Isobars are the atoms of those elements which have the same mass number but different atomic numbers are called isobars.