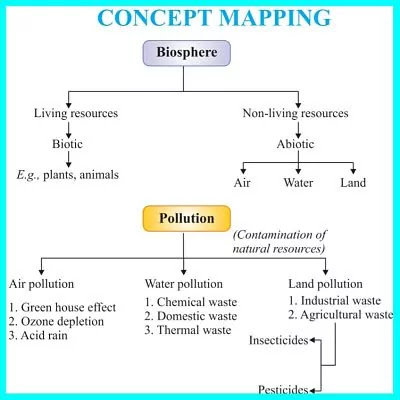 ✳️Introduction :-
🔹 Life on earth depends on resources like soil, water, air and energy from sun.

🔹 Uneven heating of air over land and water-bodies causes winds.

🔹 Evaporation of water from water-bodies and subsequent condensation give us rain.

🔹 Pollution of air, water and soil affect the quality of life.

🔹 We need to conserve our natural resources and use them in a sustainable manner.

🔹 Various nutrients are used again and again in a cycle fashion. This leads to a certain balance between the various components of the biosphere.

🔹 A Resource is a stock or supply of something useful. Resources can be manmade or Natural.

🔹 A Resource which exists in nature is called a Natural Resource. It is not produced by any human being; rather it is available in nature itself. Human beings and other animals depend upon these resources for their existence.

✴️Lithosphere :- The outer crust of the earth is called the lithosphere.

✴️Hydrosphere :- Sum of all water bodies is called hydrosphere.

✴️Atmosphere :- Air that covers the earth is called the atmosphere.

🔹 All living things on earth together with atmosphere, the hydrosphere and the lithosphere interact and make life possible is known as biosphere. 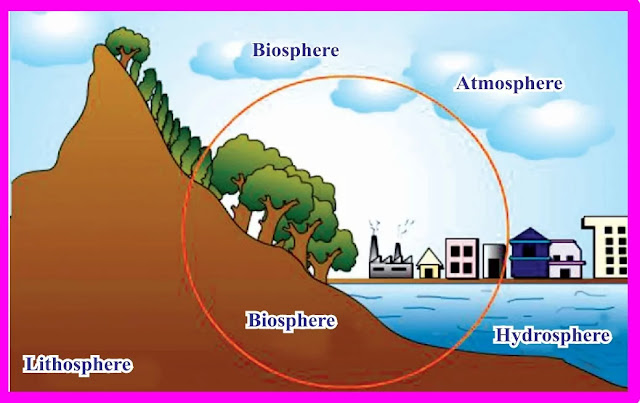 👉 The biosphere can be divided into two parts:

🔹 Air is a mixture of many gases like nitrogen, oxygen, carbon dioxide and water vapour.

🔹 Air contains oxygen which is essential to living organisms for respiration. So it is called breath of life.

🔹 Atmosphere keeps the average temperature of the earth steady during the day and whole year.

🔹 The rate of atomosphere in climate control is the movement of Air, Rain, Air pollution, Water.

🔹 During the day, the direction of wind is from sea to land. This is because the air above the land gets heated faster and starts rising.

🔹 During the night, the direction of wind is from land to sea. This is because at night, both land and sea start to cool.

🔹 The movement of air from one region to the other creates winds.

🔹 The presence of harmful substances in the air leads to pollution of the air.

🔹 It can severely affect the health of living organisms and the quality of the environment.

🔹 Rain is formed by evaporation and condensation of water through water cycle.

🔹 Rain is very important because it carries out all the agriculture processes in the plants. 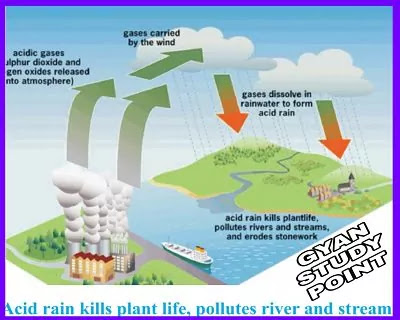 🔹 Acid rain is caused by the release of the gases like SO2 (sulphur dioxide) and NO2 (nitrogen dioxide) released from the emission of vehicles and combustion of fuels.

🔹 These gases dissolve in rain water to form nitric acid and sulphuric acid.

🔹 Water is a renewable resource.

🔹 It is essential for all physiological activities of plants and animals.

🔹 Water is used for transportation.

🔹 Used by plants and animals for life-processes.

🔹 Water available for drinking should be conserved and used wisely.

🔹 When water becomes unfit for drinking and other uses, then water is said to be polluted.

🔹 Dumping of wastes from the industries into water bodies.

🔹 Washing of clothes near water bodies. 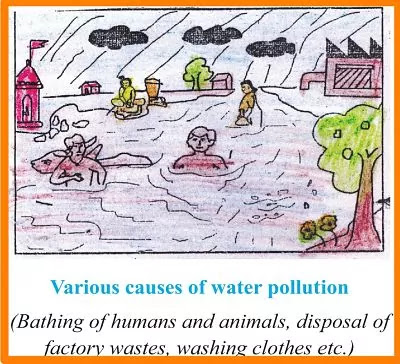 🔹 Soil is the most important natural resource which supplies nutrients to the life forms.

🔹 Soil is formed by weathering of rocks in thousands of years.

👉 Following factors are responsible for making soil from rocks.

🔹 D. Some organisms like lichen and mosses grow on the surface of rocks and they release certain substances that cause weathering of rocks and a thin layer of soil is formed.

🔹 Mosses or Bryophytes are indicators of soil pollution.

🔹 Removal of the topmost layer of soil by wind, water or other activities is called soil erosion.

🔹 Over grazing of land.

🔹 Removal of top soil by wind (storms) and water (floods).

🔹 Various biogeochemical cycles exist in the nature which represent interaction between biotic and abiotic components of the biosphere to make a stable system.

🔹 The whole process in which water evaporates and falls on the land as rain and water flows back into the sea via rivers is known as the water-cycle. 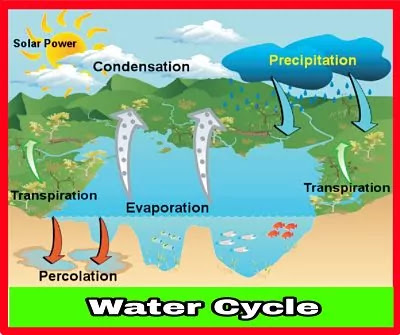 ✴️a. Evaporation :- Water on earth changes to vapour due to sun’s heat and rises above.

✴️b. Transpiration :- Plants absorb water through the roots and then give off excess water in the form of vapor through pores in their leaves.

✴️c. Respiration :- It is a process in living organisms involving the production of energy, with the intake of oxygen and the release of carbon dioxide along with water vapour.

✴️d. Precipitation :- It is the process of condensation of water vapour in atmosphere into liduid which fall down in the form of rain, snow, sleet or hail.

✴️e. Percolation and Absorption :- Some of the precipitation soaks into the ground to reach the underground water, some on land gets absorbed by the plants, crops and trees to grow and the rest flows downhill as runoff to reach the seas to complete the whole water cycle.

🔹 The sequence in which nitrogen passes from the atmosphere to the soil and organisms, and then is eventually released back into the atmosphere, is called nitrogen cycle. 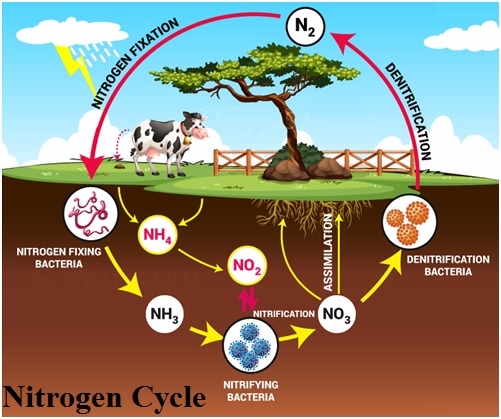 ✴️a. Nitrogen Fixation :- It is a process by which atmospheric nitrogen is converted into the form which can be easily absorbed the organisms on earth.

✴️b. Nitrification :- It is the process by which ammonia is converted into nitrites and nitrates.

✴️c. Ammonification :- It is the process by which soil bacteria decompose dead organic matter and release ammonia into soil.

✴️d. Denitrification :- It is the process by which nitrates are converted into atmospheric nitrogen back to complete the cycle.

🔹 The carbon cycle is the process by which carbon moves from the atmosphere into the Earth and its organisms and then back again. 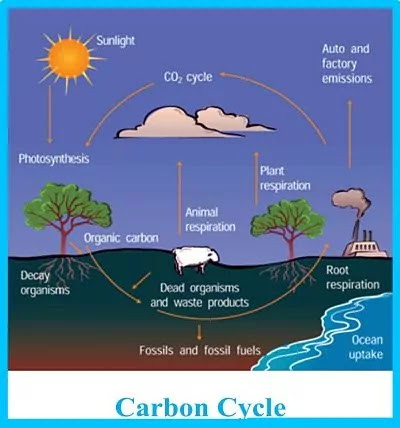 ✴️Photosynthesis :- In this process plants form their food by absorbing the atmospheric carbon in the form of carbon dioxide gas and release oxygen gas.

✴️Decomposition :- In this process dead plants and animals get decomposed to release carbon into the environment.

✴️Combustion :- Burning of fossil fuels releases carbon dioxide gas into the environment as by product.

✴️Movement of carbon from the atmosphere to the oceans :-

🔹 The oceans, and other water bodies, soak up about a quarter of the carbon dioxide to form carbonates.

🔹 The cyclic process by which oxygen element is circulated continuously through the living and non-living components of the biosphere constitutes oxygen cycle. 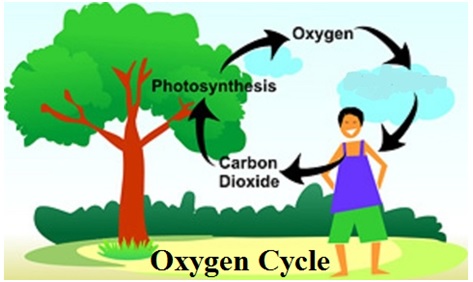 ✴️Combustion :- During the processes of combustion (or burning), oxygen reacts with carbon to form carbon dioxide gas.

✴️Photosybthesis :- Carbon dioxide gas from atmosphere is absorbed by green plants in the presence of sunlight to form carbohydrates and oxygen. Thus, oxygen is liberated in atmosphere.

🔹 Greenhouse gases such as carbon dioxide, methane, nitrogen oxide and Chlorofuorocarbans present in atmosphere prevent the escape of heat falling on Earth’s surface rather than absorbing it.

🔹 This keeps the Earth warm and the phenomenon is known greenhouse effect.

🔹 Three molecules of oxygen combine to form ozone which forms a layer in stratosphere.

🔹 It acts as a protective shield as it prevents harmful ultraviolet radiations to reach the earth.

🔹 Compounds like CFCs (Chloro Fluoro Carbons) reacts with ozone releasing molecular oxygen resulting in breakdown of ozone, which is termed as ozone depletion.