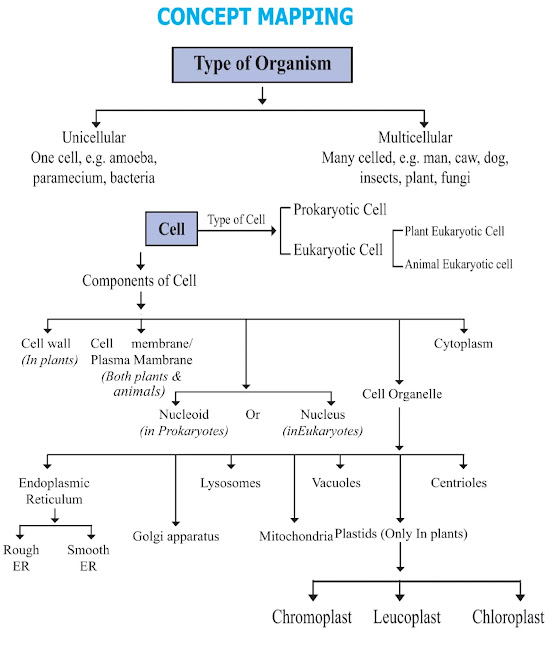 ✔ Topics in the Chapter :-
🔷 Introduction
🔷 The cell theory
▶ Types of organisms
▶ Types of cells
🔷 Difference between Animal cell and Plant cell
🔷 Diffusion
🔷 Osmosis
🔷 Hypotonic or Hypertonic or Isotonic solution
🔷 Plasma membrane or Cell membrane
▶ Properties of Plasma membrane
▶ Functions of Plasma membrane
🔷 Cell Wall
▶ Function of Cell Wall
🔷 Plasmolysis
🔷 Nucleus
▶ Composition of Nucleus
▶ Functions of Nucleus
🔷 Nucleoid
🔷 Cytoplasm
▶ Function of Cytoplasm
🔷 Endoplasmic Reticulum (ER)
▶ Types of Endoplasmic Reticulum
▶ Functions of Endoplasmic Reticulum
🔷 Golgi Apparatus
▶ Function of Golgi Body
🔷 Lysosomes
▶ Functions of Lysosomes
🔷 Mitochondria
▶ Structure of mitochondria
▶ Functions of mitochondria
🔷 Plastids
▶ Structure of Plastids
▶ Function of Plastids
🔷 Vacuoles
▶ Functions of vacuoles
✔ Introduction :-
🔹 All living forms are composed of microscopic units called as 'Cells'.
🔹 Cell is the structural and functional unit of life. It is the basic unit of life.
🔹 Study of structure and composition of cell is called as 'Cytology'.
🔹 Cell was first discovered and observed by Robert Hooke in a thin dead slice of cork in the year 1665.
🔹 Leeuwenhoek (1674), discovered the free living cells in pond water with the improved microscope.
🔹 Robert Brown discovered the nucleus in the cell in 1831.
🔹 Purkinje coined the term ‘protoplasm’ for the fluid substance of the cell in 1839.

🔹 Two biologists, Schleiden and Schwann (1838) gave the Cell theory which states that :

▶ (i) All plants and animals are composed of cells.

🔹 On the basis of no. of Cells, Organisms are of two types:

▶ (i) Unicellular Organism:- These organisms are single celled which perform all the functions.

▶ (ii) Multicellular Organism:- Many cells grouped together to perform different function in the body  and also form various body parts.

🔹 The shape and size of cell are different according to the kind of function they perform. There is division of labour in cells.

🔹 Each cell has certain kind of cell organelles to perform different type of function like mitochondria for respiration.

🔹 There are two types of cells: 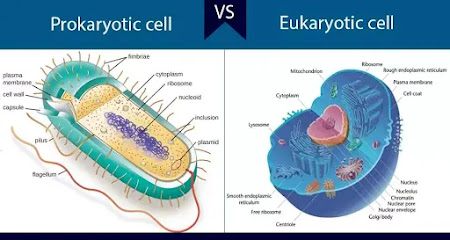 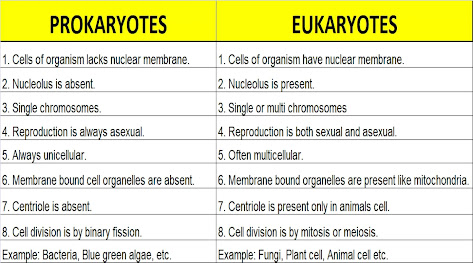 ✔ Diffusion :-
🔹 The spontaneous movement of a substance from a region of high concentration to the region of low
concentration is called diffusion.
🔹 Some substances like carbon dioxide or oxygen can move across the cell membrane by a process        called diffusion. Cell also obtains nutrition from the environment.
✔ Osmosis :-
🔹 The movement of water molecules through selectively permeable membrane along the concentration gradient is called osmosis.
🔹 Plant cell tend to obtain water through osmosis.
✔ Hypotonic or Hypertonic or Isotonic solution :-
🔹 Hypotonic solutions contain lesser amount of solute concentration compared to the surrounding fluid and can force the cell to rupture due to excess input of water into the cell.
🔹 Hypertonic solutions contain higher concentration of solute compared to the surrounding fluid and thus push water out of cell, shrinking it.
🔹 Isotonic solutions are those which have the same solute and pH concentration as the surrounding body fluid or the cytoplasm.
✔ Plasma membrane or Cell membrane :-
🔹 This is the outermost covering of the cell that separates the contents of the cell from its external environment.
🔹 The plasma membrane allows or permits the entry and exit of some materials in and out of the cell.
🔹 It also prevents movement of some other materials. The cell membrane is called selectively permeable membrane.
🔹 It is made up of lipid and protein.
✔ Properties of Plasma membrane :-
🔹 It is flexible (made up of organic molecules called lipids and proteins).
🔹 Its flexibility enables cell to engulf in food and other from the external environment. This process is called Endocytosis. Amoeba acquire food through this process.
✔ Functions of Plasma membrane :-
🔹 It permits the entry and exit of some materials in and out of the cell.
🔹 It prevents movement of some other materials not required for the cell as it acts like selectively permeable membrane.
✔ Cell Wall :-
🔹 Cell wall is another rigid outer covering in addition to the plasma membrane found in plant cell. The cell wall lies outside the plasma membrane.
🔹 The plant cell wall is mainly composed of cellulose. Cellulose is a complex substance which provides structural strength to plants.
✔ Function of Cell Wall :-
🔹 Cell walls permit the cells of plants, fungi and bacteria to withstand very dilute (hypotonic) external media without bursting.
🔹 In such media the cells tend to take up water by osmosis. The cell swells, building up pressure against the cell wall. The wall exerts an equal pressure against the swollen cell.
🔹 Because of cell wall, cells can withstand much greater changes in the surrounding medium than animal cells.
✔ Plasmolysis :-
🔹 When a living plant cell loses water through osmosis there is shrinkage or contraction of the contents of the cell away from the cell wall. This phenomenon is known as plasmolysis.
✔ Nucleus :- 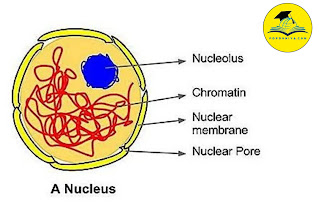