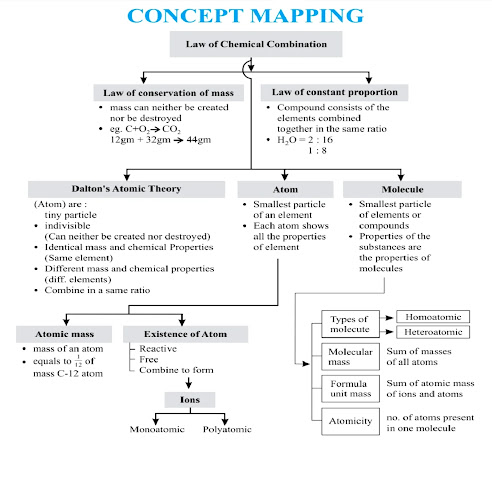 ✔ TOPICS IN THIS CHAPTER

▶ Law of Conservation of Mass

🔹  Around 500 B.C., Indian philosopher Maharishi Kanad, postulated the theory if we go on dividing matter (padarth), we will obtain smallest particle beyond which further division can't be possible which is known as 'parmanu'.

🔹 This law established after the experiments by Lavoisier and Joseph L. Proust.

🔹 The process of combination of two or more elements to form new compounds is governed by certain laws called laws of chemical combination. These are:

1. Law of conservation of mass.

🔹 This law states that Mass can neither be created nor destroyed in a chemical reaction.

🔹This law states that in a chemical substance the elements are always present in definite proportions by mass.

(The ratio of hydrogen and oxygen in pure water is always 1: 8 by weight.)

- This law is also called law of definite proportions or law of constant proportions.

🔹According to Dalton’s atomic theory, all matter, whether an element, a compound or a mixture is composed of small particles called atoms.

🔹 (I) All matter is made of very tiny particles called atoms.

🔹 (II) Atoms are indivisible particles, which cannot be created or destroyed in a chemical reaction.

🔹 (III) Atoms of a given element are identical in mass and chemical properties. (Law of conservation of mass)

🔹 (VI) The relative number and kinds of atoms are constant in a given compound.

🔹According to modern atomic theory, an atom is the smallest particle of an element which takes part in chemical reaction.

🔹Atoms are very small and hence can't be seen even through very powerful microscope. 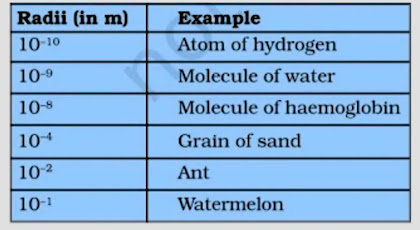 🔹Dalton was the first scientist to use the symbols for elements.

🔹Berzilius suggested that the symbols of elements should be made from one or two letters of the name of the element. 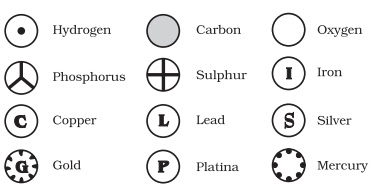 Symbols of elements as proposed by Dalton

🔹The name copper was taken from Cyprus, a place from where it was found for first time.

🔹The first letter of a symbol is always written as a capital letter (uppercase) and the second letter as a small letter (lowercase). For example: hydrogen (H), aluminium (Al), cobalt (co).

🔹Some other symbols have been taken from the names of elements in Latin, German or Greek.

▶ For Example:- Fe from its Latin name ferrum, sodium is Na from natrium, potassium is K from kalium. 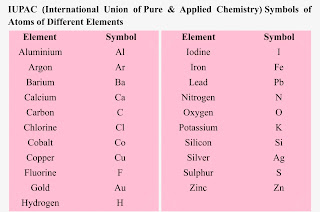 ▶ Atomic Existance :-
🔹Atoms of most of the elements are very reactive and does not exist in free state.
🔹Only the atoms of noble gases (such as He, Ne, Ar. Kr. Xe and Rn) are chemically unreactive and can exist in the free state as single atom.
🔹Atoms of all other elements combine together to form molecules or ions.

✔ Molecule :-
🔹A molecule is a group of two or more atoms which are chemically bonded with each other.
🔹A molecule is the smallest particle of matter (except element) which is capable of an independent existence and show all properties of that substance.
E.g.  'H₂O' is the smallest particle of water which shows all the properties of water.
🔹A molecule may have atom of same or different elements, depending upon this,
▶ Molecule can be categorized into two categories :-
🔹Homoatomic molecules (containing atom of same element)
▶ Example:-  H₂ , O₂ , O₃ , S₈ , P₄  etc.
🔹Heteroatomic molecules or compounds (containing atoms of different elements)
▶ Example:-  H₂O , CO₂ , NaCl , CaCO₃ etc.

✔ Atomicity :-
🔹The number of atoms present in one molecule of an element is called its atomicity. 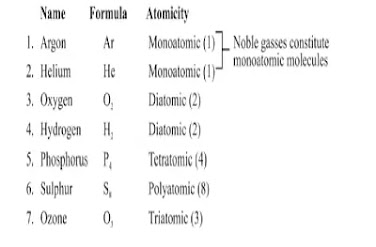 ✔ Chemical formulae :-
🔹It is the symbolic representation of the composition of a compound.
▶ Characteristics of chemical formulae :-
🔹The valencies or charges on ion must balance.
🔹When a compound is formed of metal and non-metal, symbol of metal comes first. É.g., CaO,         NaCl, CuO.
🔹When polyatomic ions are used, the ions are enclosed in brackets before writing the number to show the ratio. E.g., Ca(OH)₂ ,(NH₄)₂SO₄
▶ Rule for writing chemical formulae :-
Rule-1
🔹 (i) We first write symbols of elements which form compound.
🔹 (ii) Below the symbolo feach element, we should write the irvalency.
🔹 (iii) Now cross the valencies of combining atoms.
🔹 (iv) with first atom, we write the valeney of second atom (asa subscript).
🔹 (v) with second atom, we write the valency of first atom (subscript).
Rule-2
🔹 When the veleney is one, subscript is not written.
Rule-3
🔹 When there are multiple number of polyatomicion, bracket must be used to separate the  Polyatomicion from subscript. 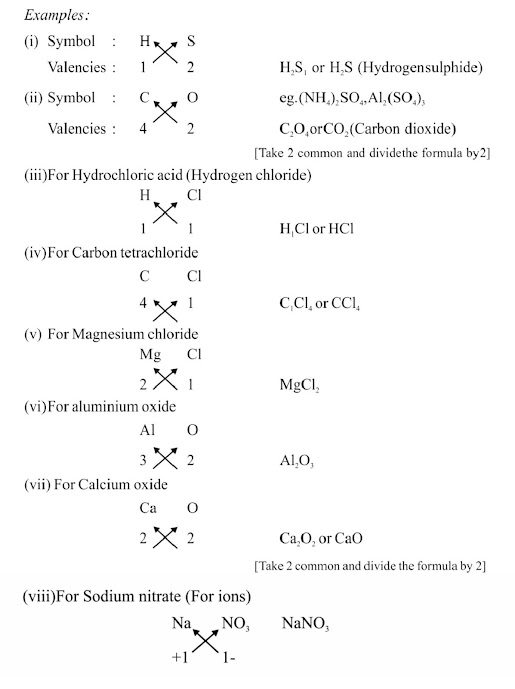 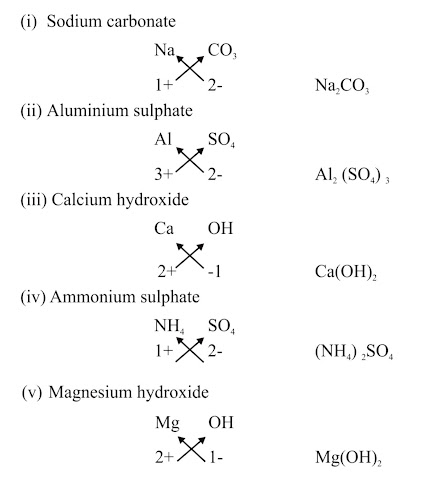