9th Class Science Notes in English chapter 2 Is Matter Around Us Pure ?

9th Class Science Notes in English chapter 2 Is Matter Around Us Pure ?

Class 9th Science chapter 2 Is Matter Around Us Pure ? Notes in English. 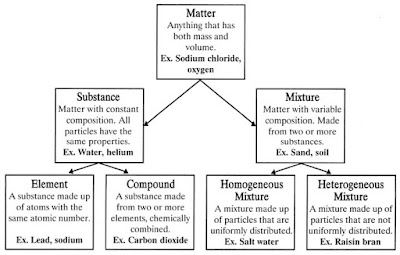 🔹Mixture and its types

🔹Solution and its properties

🔹Concentration of a solution

🔹Suspension and its properties

🔹Colloidal solution and its properties

🔹Separation of the components of mixtures

🔹Separation of cream from milk

🔹Separating a mixture of salt and ammonium chloride

🔹Difference between mixtures and compounds

🔹Anything which occupies space and has mass is called matter. Matter can be divided in two categories.

(I) Pure Substance:- It consists of single types of particles which are same in their chemical nature.

🔹Mixture consists of more than one kind of pure substances which can be separated by physical method.

(I) Homogeneous mixture:- A mixture is said to be homogeneous if all the components of the mixture are uniformly mixed and there are no boundaries of separation between them.

(II) Heterogeneous mixtures:- A mixture is said to be heterogeneous if all the components of the mixture are not uniformly mixed and there are visible boundaries of separation between them.

✔ Solution and its properties

🔹A Solution is a homogeneous mixture of two or more substances.

✔ A Solution has two components:-

(I) Solvent:- The component of the solution that dissolves the other component in it (usually the component present in larger amount) is called the solvent.

(II) Solute:- The component of the solution that is dissolved in the solvent (usually present in lesser quantity) is called the solute.

🔹A solution is a homogeneous mixture.

🔹The particles of a solution are smaller than 1 nm (10-9) in diameter which cannot be seen by naked eyes.

🔹They do not scatter a beam of light passing through the solution that is they don't show tyndall effect. So, the path of light is not visible in a solution.

🔹The solute particles cannot be separated from the mixture by the process of filtration.

🔹The solution is stable and solute par cles do not settle down when left undisturbed.

✔ Concentration of a solution:-

(III) Solubility:- The amount of the solute present in the saturated solution at the given temperature is called its solubility.

✔ Suspension and its properties

🔹 A suspension is a heterogeneous mixture in which the the solute particles do not dissolve but remain suspended throughout the bulk of the medium.
Ex: Chalk in water, smoke in the air

🔹 It is a heterogeneous mixture.

🔹Particles of a suspension are visible to the naked eye.

🔹Size of the particles is greater than 100 nm.

🔹It is unstable mixture. Solute settles down at the bottom over period of time.

🔹If the solution is passed through filter paper, solute and solvent gets separated.

🔹It scatters light when light is passed through the solution i.e. it shows Tyndall effect.

✔ Colloidal solution and its properties:-

🔹Colloid solution is heterogeneous mixture in which the size of particles lies between the true solutions and suspensions.

🔹Colloidal particles can easily scatter a beam of visible light. This phenomenon is called Tyndall effect.

🔹The particles of colloid can't be seen by naked eyes individually.

🔹It is a heterogeneous mixture and thus solute and solvent can't be separated by filter paper.

🔹Size of particles is smaller than suspensions but greater than solutions (1 nm to 100 nm).

🔹It is a stable mixture. Particles do not settle down at the bottom over a period of time.

🔹They do not settle down when left undisturbed which means colloid is quite stable.


Some Common examples of colloids (in the table) 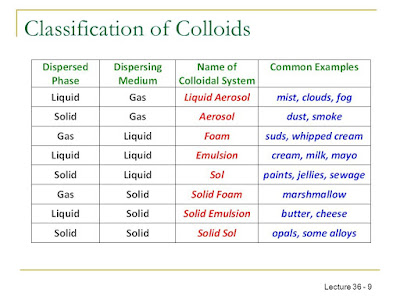 Separation of the components of mixtures

🔹Different methods of separation are used to get individual components from mixture. Heterogeneous mixtures can be separated into their respective constituents by simple physical methods like handpicking, sieving, filtration etc.

🔹It is based on the fact that liquid vaporises easily than the solid. 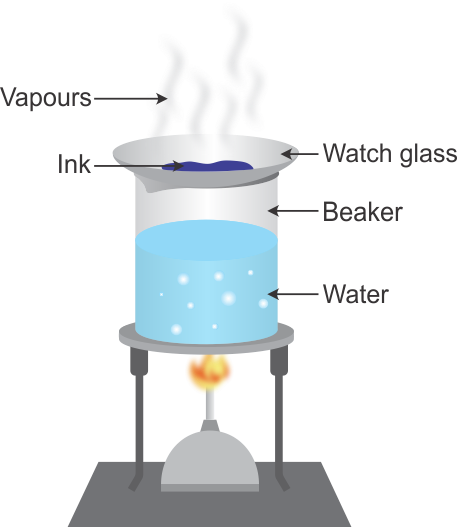 🔹Fill half a beaker with water.

🔹Put a watch glass on the mouth of the beaker.

🔹Put few drops of ink on the watch glass.

🔹Now start heating the beaker. We do not want to heat the ink directly. You will see that evaporation is taking place from the watch glass.

🔹Continue heating as the evaporation goes on and stop heating when you do not see any further change on the watch glass.

✔ Separation of cream from milk:-

🔹The process of centrifugation is used to separate the cream from milk. It is a method of separating the suspended particles of substance from a liquid.

🔹This process is carried out by the machine called centrifuge.

🔹Sometimes, the solid particles in a liquid are very small and pass through a filter paper. For such particles the filtration technique cannot be used.

🔹The mixture is rotated rapidly so that the heavier particles in the mixtures settle down to the bottom.

🔹The basic principle of centrifugation is that the denser particles are forced to the bottom and the liquid being lighter remains at the top.

✔ Steps of separating cream from milk:-

🔹Take some full-cream milk in a test tube.

🔹Centrifuge it by using a centrifuging machine for two minutes. Application of centrifugation:

🔹Used in diagnostic laboratories for blood and urine tests.

🔹Used in dairies and home to separate butter from cream.

🔹Used in washing machines to squeeze out water from wet clothes.

🔹The separation of separating two immiscible liquid is carried out by the use of funnel.

🔹The basic principle involve is the difference between the densities of two liquids form two separate layers.

🔹Pour the mixture of kerosene oil and water in a separating funnel.

🔹Let it stand undisturbed for sometime so that separate layers of oil and water are formed.

🔹Open the stopcock of the separating funnel and pour out the lower layer of water carefully.

🔹Close the stopcock of the separating funnel as the oil reaches the stop-cock.

🔹To separate mixture of oil and water.

🔹In the extraction of iron from its ore, the lighter slag is removed from the top by this method to leave the molten iron at the bottom in the furnace.

🔹This process is used to separate mixtures that contain a sublimable volatile component from a non-sublimable impurity.

🔹Sublimation is process where a substance directly changes from solid to gaseous state on heating.

🔹Ammonium chloride, camphor, naphthalene and anthracene are some examples which can sublime. 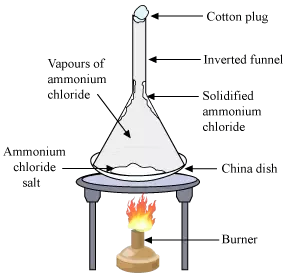 Separation of Ammonium chloride and salt by Sublimation

🔹Used to separate those solutes which dissolve in the same solvent.

🔹Used for sepration of colours.

🔹The colours which are more soluble in water rises faster and get colours get separated into layers. 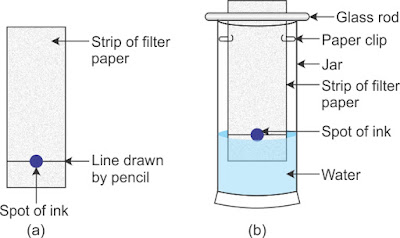 🔹Colours in a dye

🔹Used for separation of components of a mixture containing two miscible liquids that boil without decomposition and have sufficient difference in their boiling points. 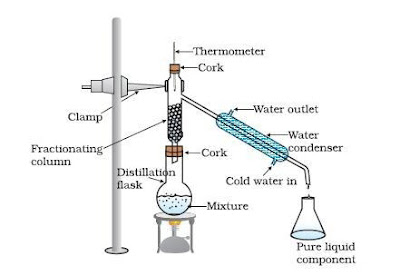 🔹Mixture of acetone and water is separated by this method.

🔹Fractional distillation is used to separate a mixture of two or more miscible liquids for which the difference in boiling points is less than 25 K.

🔹Air is a homogeneous mixture and can be separated into its components by fractional distillation.

▶ Below is diagram which shows the steps of separation of air:- 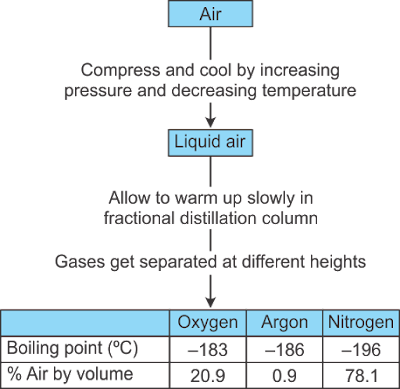 🔹The air is compressed by increasing the pressure and is then cooled by decreasing the temperature to get liquid air.

🔹The liquid air is warm-up slowly in a fractional distillation column, where gases get separated at different heights depending upon their boiling points. 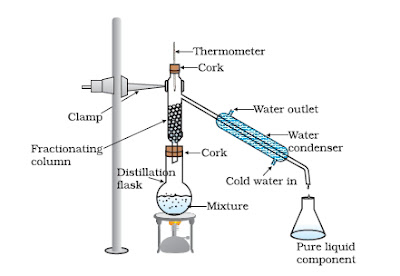 🔹It used to separate a gas from the air.

🔹Used to remove impurities from solid and purify it.

🔹It separates a pure solid from mixture in the form of crystals.

🔹This process is used in purification of salt from sea water, separation of crystals of alum from impure samples.

▶ It is better method than evaporation because:-

🔹Solids decompose or some, like sugar, may get charred on heating to dryness.

🔹Some impurities may remain dissolved in the solution even after filtration. On evaporation these contaminate the solid. 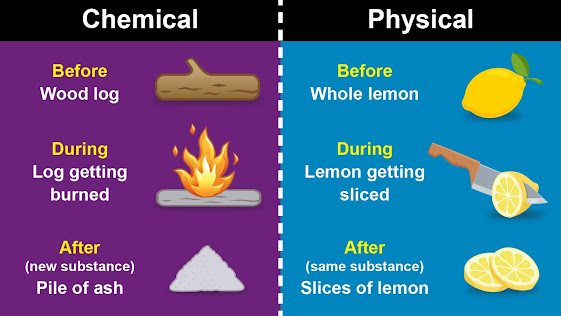 🔹The pure substance is divided in two types on the basis of their chemical composition: 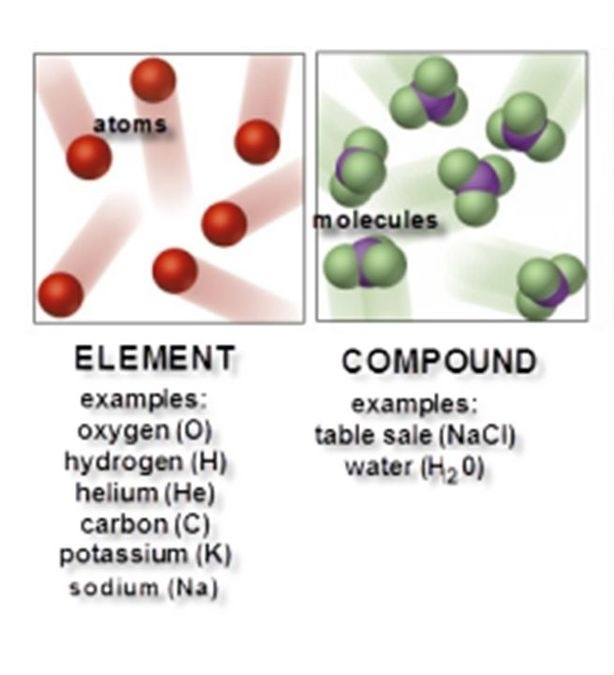 🔹According to Antoine Laurent Lavoisier, element is a basic form of matter that cannot be broken down into simpler substances by chemical reactions.

🔹It is divided in three types which are metals, non-metals and metalloids.

🔹They have a lustre (shine).

🔹They have silvery-grey or golden-yellow colour.

🔹They conduct heat and electricity.

🔹They are ductile (can be drawn into wires).

🔹They are malleable (can be hammered into thin sheets).

🔹They are sonorous (make a ringing sound when hit).

▶ Mercury is the only metal that is liquid at room temperature.

🔹They display a variety of colours.

🔹They are poor conductors of heat and electricity.

🔹They are not lustrous, sonorous or malleable.

▶ Metalloids:- Elements having intermediate properties between those of metals and non- metals are called metalloids.

A compound is a substance composed of two or more elements, chemically combined with one another in a fixed proportion.


▶ Difference between mixtures and compounds:- 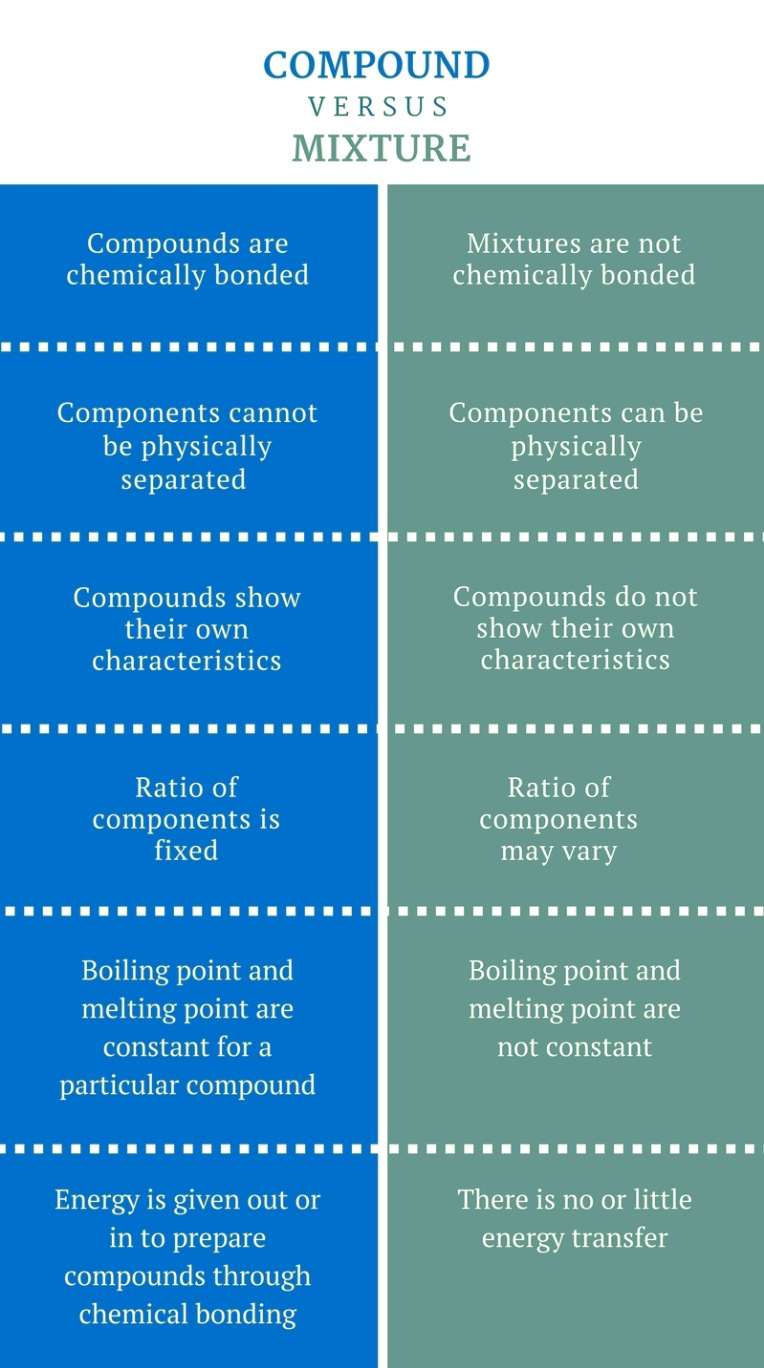