CBSE Revision Notes for CBSE Class 09 Science Sound Sound: Nature of sound and its propagation in various media, speed of sound, range of hearing in humans; ultrasound; reflection of sound; echo and SONAR. Structure of the Human Ear (Auditory aspect only). 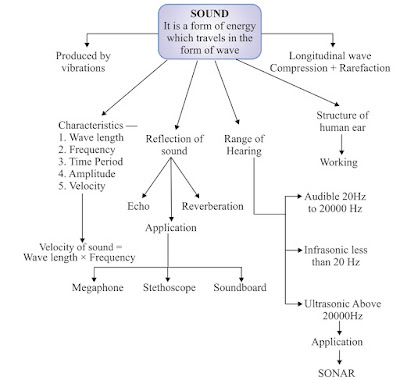 🔹 It is a form of energy which travels in the form of wave. 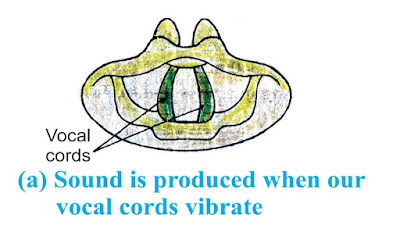 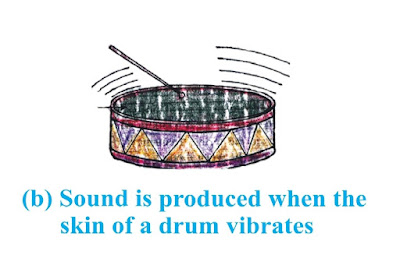 ⭐ When a body vibrates then it compresses the air surrounding it and form an area of high density called compression (C).

🔹 Compression is the part of wave in which particles of the medium are closer to one another forming high pressure.

🔹 This compression move away from the vibrating body.

⭐ When vibrating body vibrates back an area of low pressure is formed called rarefaction (R).

🔹 Rarefaction is the area of wave in which particles of the medium are further apart from one another forming a low pressure or low density area.

🔹 When body vibrates back and forth, a series of compression and rarefaction is formed in air resulting in sound wave.

🔹 It cannot travel in vaccum. 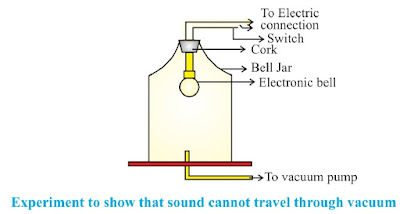 🔹 A wave in which the particles of the medium vibrate back and forth in the same direction in which the wave is moving, is called a longitudinal wave.

🔹 The characteristics of sound waves are: wavelength, frequency, amplitude, time period and velocity.

👉 1.Wavelength :- In sound waves the combined length of a compression and an adjacent rarefaction is called its wavelength. It is denoted by the Greek letter lamda 2. Its SI unit is metre.

👉 2.Frequency :- No. of complete waves produced in one second or number of vibrations per second is called frequency. The SI unit of frequency is hertz (Hz). The symbol of frequency is v (nu).

👉 4.Amplitude :- The maximum displacement of the particle of the medium from their original undisturbed position is called amplitude of the wave. Amplitude is denoted by A and its SI unit is metre (m).

Sound have characteristics like pitch and loudness and timbre.

🔹 The timbre of a sound depends on the shape of sound wave produced by it. It is the characteristic of musical sound. Sound of single (same) frequency is called tone while a mixture of different frequencies is called note. Noise is unpleasant to hear while music is pleasant to hear and it is of good quality.

👉 5.Velocity :- The distance travelled by a wave in one second is called velocity of the wave. Its SI unit is metre per second.

✳️Speed of Sound in Various Mediums :-

🔹 Speed of sound depends on the nature of material through which it travels. It is slowest in gases, faster in liquids and fastest in solids.

🔹 Speed of sound increases with the rise in temperature.

🔹 Speed of sound increases as humidity of air increases.

🔹 Speed of light is faster than speed of sound.

🔹 Supersonic refers to the speed of an object which is greater than the speed of sound and it produces extremely loud sound waves called 'shock waves' in air.

🔹 Sonic boom is an explosive noise caused by shock waves.

🔹 It emits tremendous sound energy which can shatter the glass panes of windows.

🔹 1. The incident sound wave, the reflected sound wave and normal at the point of incidence lie in the same plane.

🔹 2. Angle of reflection of sound is always equal to the angle of incidence of sound.

🔹 The repetition of sound caused by the reflection of sound waves is called an echo. We can hear echo when there is a time gap of 0.1 second in original sound and echo (reflected sound).

🔹 Echo is produced when sound reflected from a hard surface (i.e., brick wall, mountain etc.) as soft surface tends to absorb sound. If it is too long, sound becomes blurred, distorted and confusing.

🔹 The persistence ofsound in a big hall due to repeated reflection ofsound from the walls, ceiling and floor of the hall is called reverberation.

👉 Methods to reduce reverberation in big halls or auditoriums

🔹 1. Panels made of felt or compressed fibre board are put on walls and ceiling to absorb sound.

🔹 2. Heavy curtains are put on doors and windows.

🔹 4. Seats are made of material having sound absorbing properties.

✳️Applications of Reflection of Sound :-

👉 1. Megaphone, loudspeakers, bulb horns and trumpets, shehnai etc. are designed to send sound in a particular direction without spreading all around. All these instruments have funnel tube which reflects sound waves repeatedly towards audience. In this amplitude of sound waves adds up to increase loudness of sound.

👉 2. Stethoscope :- It is a medical instrument used for listening the sounds produced in human body mainly in heart and lungs. The sound of the heartbeats reaches the doctor's ears by the multiple reflection of the sound waves in the rubber tube of stethoscope.

👉 3. Sound Board :- In big halls or auditoriums sound is absorbed by walls, ceiling, seats etc. So a curved board (sound board) is placed behind the speakers so that his speech can be heard easily by audiences. The soundboard works on the multiple reflection of sound.

👉 4. The ceiling of concert halls are made curved, so that sound after reflection from ceiling, reaches all the parts of the hall.

🔹 The sounds of frequencies lower than 20 Hz are known as 'infrasonic sounds’. Elephants and whales produces infrasonic waves.

🔹 The sounds of frequencies higher than 20 KHz are known as 'ultrasonic waves'. Dogs, parpoises, dolphins, bats and rats can hear ultrasonic sounds.

🔹 1.It is used to detect cracks in metal blocks in industries without damaging them. 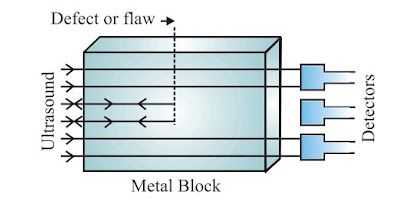 🔹 2. It is used to investigate the internal organs of human body such as liver, gall bladder, kidneys, uterus and heart.

🔹 3. Ultrasonography : The technique of obtaining pictures of internal organs of the body by using echoes of ultrasound waves is called ultrasonography.

🔹 4. Ultrasound is used to split tiny stones in kidneys into fine grains.

🔹 SONAR is a device which is used to find distance, direction and speed of underwater objects.

🔹 It consists of a transmitter and a receptor or detector and installed at the bottom of a ship.

🔹 These waves travel through water and after striking the objects on the bottom of sea, are reflected back and received by detector. 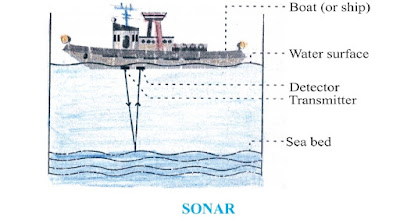 🔹 These reflected waves are converted into electric signals by detector.

🔹 The sonar device measures the time taken by ultrasound waves to travel from ship to bottom of sea and back to ship.

🔹 The outer ear is called pinna. It collects the sound from surroundings.

🔹 The inner ear has a coiled tube called cochlea, which is connected with oval window. Cochlea is filled with a liquid containing nerve cells. Other side of cochlea is connected to auditory nerve which goes to brain. 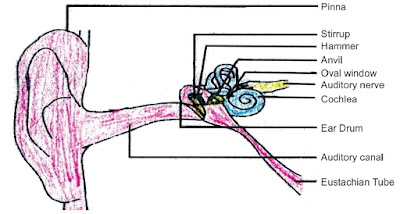 🔹 When compression of sound wave strikes the ear drum, the pressure on the outside of ear drum increase and pushes the ear drum inwards.
🔹 While during rarefaction ear drum moves outwards. Thus, ear drum starts vibrating back and forth.
🔹 These vibrations are increased by three bones and middle ear transmits these amplified pressure variations received from sound waves to inner ear.
🔹 In the inner ear the pressure variations are turned into electric signals by the cochlea.
🔹 These electric signals are sent to the brain via auditory nerve and the brain interprets them as sound.