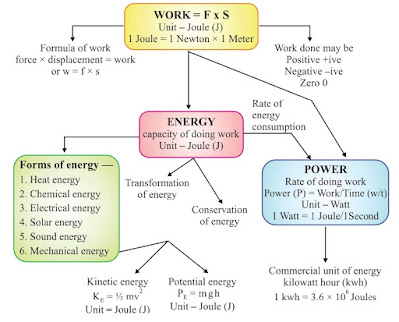 🔹 When a force acts on an object and the object shows displacement, the force has done work on the object.

🔹 When both the force and the displacement are in the same direction, positive work is done.
▶ W = F x s
🔹 When force acts in a direction opposite to the direction of displacement, the work done is negative.
▶ W = -F x s

👉 Two conditions need to be satisfied for work to be done :-

👉 The amount of work done depends on the following factors :-

🔹 The energy possessed by a body on account of its motion or position is called Mechanical Energy.

🔹 The energy of a body due to its motion is called kinetic energy.

🔹 Kinetic energy is directly proportional to mass and the square of velocity.

✳️Potential Energy :-
🔹 The energy of a body due to its position or change in shape is known as potential energy.
Examples are:-

🔹 On the basis of position and change in shape of object, potential energy is of two type:

🔹 It is the energy possessed by a body due to it position above the ground.

🔹 It is the energy possessed by a body due to its change in shape.

✳️Law of Conservation of Energy :-

🔹 The time rate of doing work is defined as power (P).

🔹 sI unit of Power is Joule per second or Js1.

🔹 The bigger unit of power is Kilowatt and represented by kW.

🔹 Some another units to measure power are:

🔹 Commercial unit of energy is kilo watt hour (kWh)
🔹 The unit kilowatt-hour means one kilowatt of power supplied for one hour.