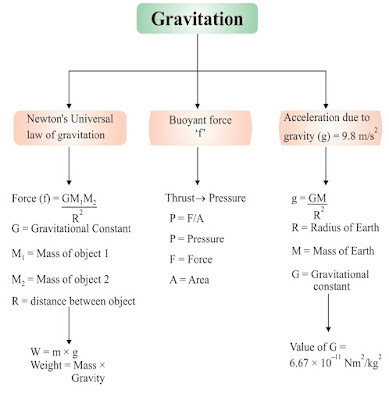 ✳️Relation between Newton’s third law of motion and Newton's law of gravitation:-

🔹 According to Newton's third law of motion, "Every object exerts equal and opposite force on other object but in opposite direction."
🔹 According to Newton's law of gravitation, “Every mass in the universe attracts the every other mass."
🔹 In case of freely falling stone and earth, stone is attracted towards earth means earth attracts the stone but according to Newton's third law of motion, the stone should also attract the earth and really it is true that stone also attracts the earth with the same force F = m x a.
🔹 but due to very less mass of the stone, the acceleration (a) in its velocity is 9.8 m/s² and acceleration (a) of earth towards stone is 1.65 x 10-24 m/s² which is negligible and we cannot feel it.

✳️Importance of Universal Law of Gravitation:-

✳️Free fall of an object and acceleration during free fall:-

🔹 When an object is thrown upward, it reaches certain height, then it starts falling down towards earth. It is because the earth's gravitational force exerts on it.
🔹 This fall under the influence of earth is called 'free fall of an object'.
🔹 During this free fall direction do not change but velocity continuously changes which is called acceleration due to gravity.
🔹 It is denoted by 'g'. Its unit is same as acceleration m/s².

✳️Relationship and difference between 'G’ and ʻg:-

✳️Difference between 'G’ and g"

✳️Difference between Mass and Weight :- 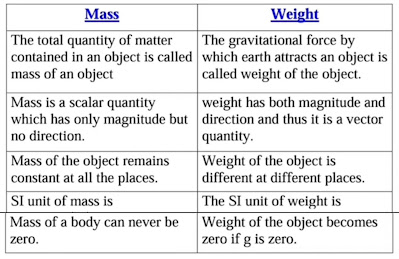 🔹 Earth is not a perfect sphere. The radius of earth increases when we go from pole to equator. Therefore, in most of the calculation, we can take g as constant at the surface of earth or closer to it.

✴️  Thrust:- The force acting on an object perpendicular to the surface is called thrust.

🔹 The effect of thrust per unit area is called pressure.
🔹 Pressure (P) = Force (F) Area (A) SI unit of pressure is Pascal denoted by 'Pa' or N/m²

🔹 (i) Force applied
🔹 (ii) Area of surface over which force

🔹 1. The base of high buildings is made wider so that weight of walls act over a large surface area and pressure is less.
🔹 2. School bags are having broad strap so that the weight of school bags fall over a larger area of the shoulder and produce less pressure and becomes less painful.
🔹 3. The blades of knives are made sharp so very small surface area and on applying force, it produces large pressure and cuts the object easily.

🔹 That is why, allpin sinks and boat/ship floats on the surface of water. (Archimedes' principle)

🔹 The mass per unit volume is called density of an object. If M is the mass and V is the volume, then density (d) is

🔹 It states, when a body is immersed fully or partially in a fluid, it experiences a upward force that is equal to the weight of the fluid displaced by it.

🔹 1) It is used in determining relative density of substances
🔹 2) It in designing ships and submarines.
🔹 3) Hydrometers and lactometers are made on this principle
🔹 It is because of this ship made of iron and steel floats in water whereas a small piece of iron sinks in it.