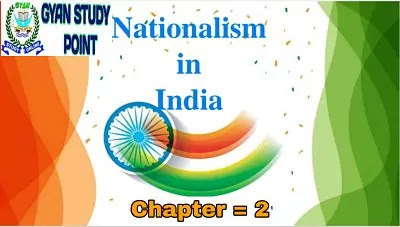 ✳️ INTRODUCTION :-
🔹 Nationalism is a sense of collective belonging among the people developed due to common identity and shared history or descent.
🔹 In India nationalism is connected to the anti-colonial movement.
🔹 Each class and group felt the effects of colonialism differently.
🔹 The Congress under Mahatma Gandhi tried to forge these groups together within one movement.

✳️ Phases of Indian Nationalism :-
👉 Moderates Phase (1885-1905)
👉 Extremists Phase (1906-1915)
👉 Gandhian Phase (1915-1947)
✳️ INC- 1st PAN India Party :-
🔹 The Indian National Congress was established when 72 delegates from all over the country met at Bombay on 28th December 1885.
🔹 Naoroji, a businessman and publicist settled in London,and member of the British Parliament, guided the younger nationalists to form INC.
A retired British official, A.O. Hume, also played a part in bringing Indians from the various regions together. 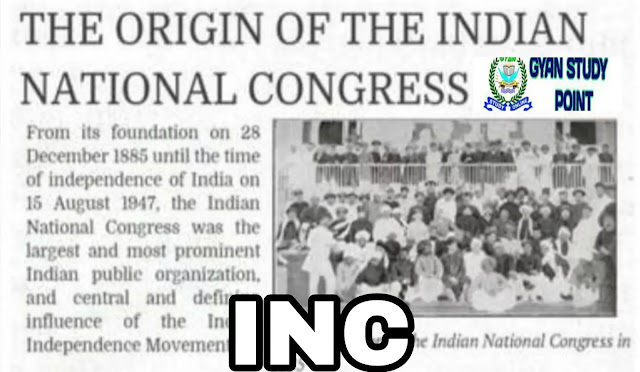 ✳️ First world war :-
🔹 28 JULY 1914 - 11 Nov 1918
✳️ Top 5 Causes of World War I :-
👉 Mlitarism - Policy of building up strong military forces to prepare for war .
👉 Alliances - Agreements between nations to aid and protect each other .
👉 Nationalism - Pride in devotion to one's country .
👉 Imperialism - When one country takes over another country .
👉 Assassination - Murder of Austrian Archduke Franz Ferdinand
✳️ Effects of World War I :-
🔹 Although India was not directly involved in the First World War, India was also affected due to England's involvement in that war.  England's defense spending was increased due to the war.  To meet that expenditure, loans were taken and taxes were increased.  The English government increased the custom duty and income tax so that additional revenue could be collected.  Commissions of things increased during the war.  Between 1913 and 1918, the prices of most things doubled.  This increased the difficulties of the common man.  People were forcibly recruited into the army.  This caused a lot of resentment in the rural areas.
🔹 Due to poor yield in many parts of India, there was shortage of food.  The influenza epidemic further aggravated the problem.  According to the 1921 census, between 120 lakh and 130 lakh people died due to famine and epidemics.
✳️ The new economic situation created in India by the First World War :-
🔹 Manchester imports in India declined as British mills were busy with war production to pave the way for supplies to Indian mills for the vast domestic market.
🔹 As the war progressed, Indian factories were called upon to supply the necessities of war.  As a result new factories were established, new workers were appointed and all were made to work long hours.
🔹 Cotton clothing production from Britain collapsed after the war and exports declined dramatically, as it was unable to modernize and compete with the US, Germany, Japan.  Hence within the colonies like India, local industrialists gradually occupied their position on the domestic market.
✳️ GANDHIJI Brief Introduction :- 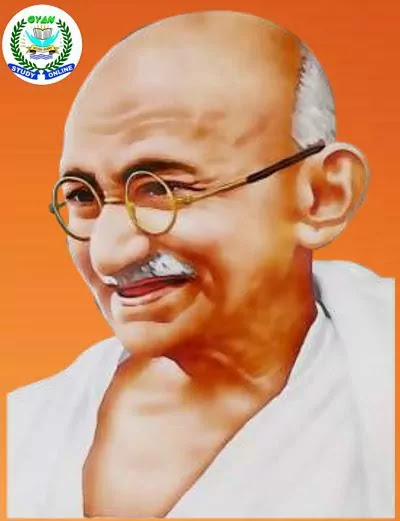 👉 Full Name : Mohandas Karamchand Gandhi
👉 Born : 2 October, 1869
👉 Place of Birth : Porbandar, Gujarat
👉 Father : Karamchand Gandhi
👉 Mother: Putlibai Gandhi
👉 Nationality : Indian
👉 Spouse : Kasturba Gandhi
👉 Professions : Lawyer, Politician, Activist, Writer
👉 Death : 30 January, 1948
✳️ Mahatma Gandhi: At South Africa :-
🔹 In May, 1893 he went to South Africa to work as a lawyer.
🔹 There he had first-hand experience of racial discrimination.
🔹 On 22 May, 1894 Gandhi established the Natal Indian Congress (NIC).
🔹 He was Influenced by the idea of Satyagraha that Is devotion of truth and in 1906 implemented non- violent protest.
🔹 He returned to India on 9th January 1915, after spending 21 years of his life in South Africa. 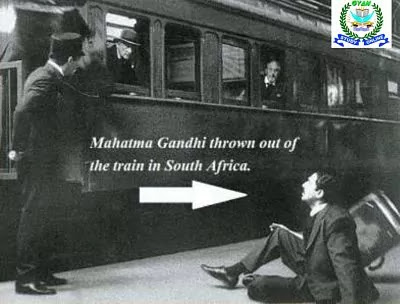 👉 9th January
👉 Pravasi Bharatiya Divas
👉 Non-Resident Indian (NRI) Day
✴️ In1915, Gandhiji returned to India permanently and joined the Indian National Congress with Gopal Krishna Gokhale as his mentor.In 1912, Gokhale visited South Africa at Gandhi's invitation. In his autobiography, Gandhi calls Gokhale his mentor and guide.
✳️ Meaning of satyagraha :-
🔹 Mahatma Gandhi adopted a unique method of mass movement in the form of Satyagraha.  This approach was based on the principle that if one is fighting for the right motive, then one does not need strength to fight the oppressor.  Gandhiji believed that a satyagrahi could win his battle only through non-violence. 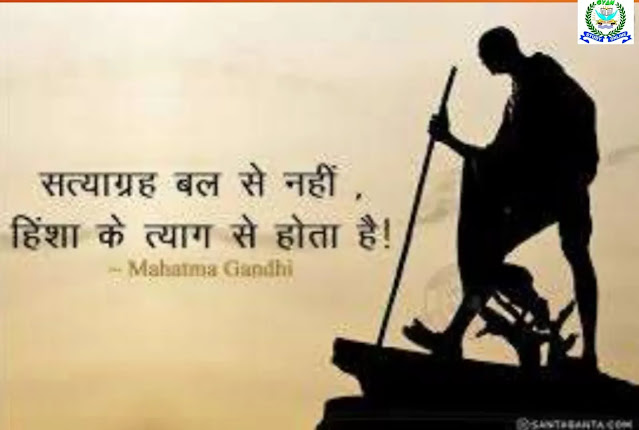 ✳️ Mahatma Gandhi and the idea of ​​Satyagraha :-
🔹 Mahatma Gandhi returned to India from South Africa in 1915.  Gandhi's novel method of mass movement is known as 'Satyagraha'.  Satyagraha emphasized truth.  Gandhiji believed that if the cause was true, if the struggle was against injustice, then physical force was not necessary to fight the oppressor.  A satyagrahi can win the battle through non-violence.  People, including oppressors, had to be persuaded to see the truth.  Satyagraha was ultimately bound for victory.
🔹 The first plantation workers in Champaran in India in 1916 were motivated to fight against the oppressive plantation system.  Satyagraha in Kheda in 1917 to support the farmers.  Satyagraha in Ahmedabad in 1918: Among cotton mill workers.
✳️ Some of the early Satyagraha movements organized by Gandhiji :-
👉 The peasant movement in Champaran in 1916.
👉 Kheda's peasant movement in 1917.
👉 Movement of mill workers of Ahmedabad in 1918.
✳️ Hind Swaraj :-
🔹 The famous book written by Mahatma Gandhi, which emphasized the non-cooperation of British rule in India.
✳️ THE ROWLATT ACT :- 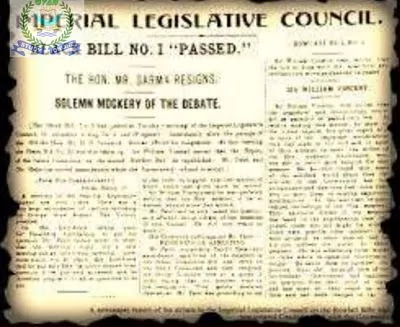 🔹 In 1919 The Rowlatt Act was passed by the British Government.
🔹  This act allowed detention of political prisoners without trial for two years.
✴️ OPPOSITION :-
🔹  On 6th April, 1919 Gandhi started the non-violent civil disobedience movement.
🔹  Kitchlew was arrested with Gandhi and Dr. Satyapal for leading protests in Punjab against the legislation.
🔹 Shops were closed down, rallies were organized and rail workshop workers went on strike.
🔹 On 10 April, Martial law was imposed and General Dyer took command.
✳️ Need for movement extension :-
🔹 The Rowlatt Satyagraha was mainly confined to the cities.  Mahatma Gandhi felt that the movement should expand in India.  He believed that this can happen only when Hindus and Muslims come on one platform.
✳️ Jallianwalla Bagh Massacre :- 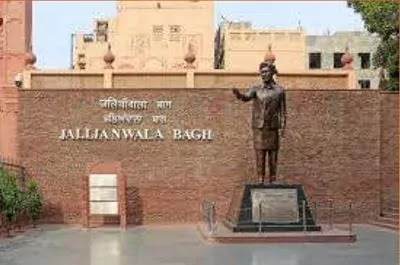