• An experiment, whose all possible outcomes are known in advance but the outcome of any specific performance cannot predicted before the completion of the experiment
• Eg: Tossing of a coin.

• A set of all possible outcomes associated with same random experiment
• Denoted by 'S'.
•Eg: In the experiment of tossing a die, If we are interested in the number that shows on the top face, then sample space would be S = (1, 2, 3, 4, 5, 6)

• It is a series of action where the outcomes are always uncertain.
• Eg: Tossing of a coin, Selecting a card from deck of cards, throwing a dice.

• A compound event is one that can be represented as a union of sample points
• Eg:
Event of drawing a heart from a deck of cards is the subset A = {heart} of the sample space S = {heart, spade, club, diamond}.
Therefore A is a simple event. None the event B of drawing a red card is a compound event since B = {heart U diamond} = {heart, diamond}.

• If a random experiment can result in any one of N different equally likely outcomes, and if exactly n of these outcomes favours to A,
Then the probability of event A, P (A) - n/Nie. favourable cases/total no. of cases.

• Remarks:
• If the probability of certain event is one, it doesn't mean that event is going to happen with certainty .
• It's just predicting that, the event is most likely to occur in comparison to other events. Predictions depend upon the past information and of course also on the way of analysing the information at hand

• Similarly if the probability of certain event is zero, it doesn't mean that, the event can never occur!

• If two events are mutually exclusive they cannot occur simultaneously.

•  A set of events is said to be exhaustive if the performance of random experiment always result in the occurrence of at least one of them .

Let E and F be events of a sample space S of an experiment, then we have

In particular, if A and B are disjoint events, 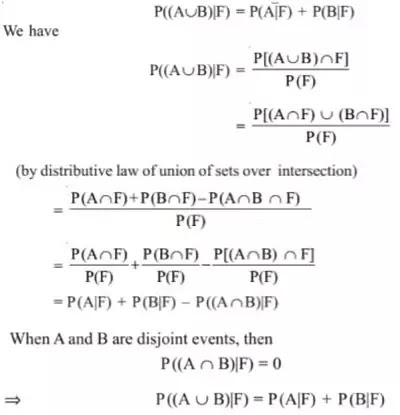 • Let E and F be two events associated with a sample space S.
•  Conditional probability of event E given that F has occurred is denoted by P(E|F) and is given by

The above result is known as the Multiplication rule of probability.

• An urn contains 10 black and 5 white balls. Two balls are drawn from the urn one after the other without replacement. What is the probability that both drawn balls are black?

• Let E and F denote respectively the events that first and second ball drawn are black.

Note:
• Multiplication rule of probability for more than two events If E, F and G are three events of sample space, we have

• Similarly, the multiplication rule of probability can be extended for four or more events.

•  If E and F are two events such that the probability of occurrence of one of them is not affected by occurrence of the other. Such events are called independent events.

• Let E and F be two events associated with the same random experiment, then E and F are said to be independent if
P (E ∩ F) - P(E). P (F)

• Three events A, B and Care said to be mutually independent, if

Partition of a sample space 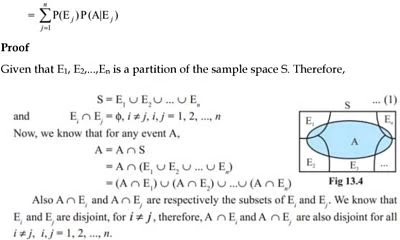 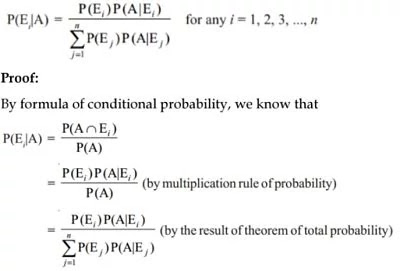 The following terminology is generally used when Bayes' theorem is applied.

Random Variables and its Probability Distributions

In most of the random experiments and Sample space, we were not only interested in the particular outcome that occurs but rather in some number associated with that outcomes as shown in following examples/experiments.

• In tossing two dice, we may be interested in the sum of the numbers on the two dice.
• In tossing a coin 50 times, we may want the number of heads obtained.
• In the experiment of taking out four articles (one after the other) at random from a lot of 20 articles in which 6 are defective, we want to know the number of defectives in the sample of four and not in the particular sequence of defective and non-defective articles.

• In all the above experiments,

Probability distribution of a random variable

• Also for all possible values of the random variable X, all elements of the sample space are covered. Hence, the sum of all the probabilities in a probability distribution must be one.

• If xi is one of the possible values of a random variable X, the statement X= xị is true only at some point (s) of the sample space. Hence, the probability that X takes value xị is always nonzero, ie. P(X = xị) ≠ 0.

Mean of a random variable

• Mean is a measure of location or central tendency in the sense that it roughly locates a middle or average value of the random variable.

ie. the mean of X is the weighted average of the possible values of X, each value being weighted by its probability with which it occurs.

• The mean of a random variable X is also called the expectation of X, denoted by E(X)

• The mean or expectation of a random variable X is the sum of the products of all possible values of X by their respective probabilities.

Variance of a random variable 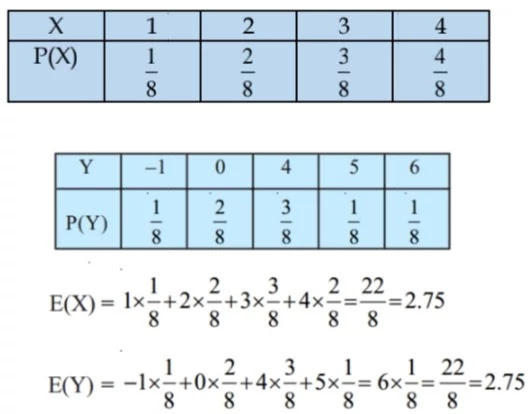 The variables X and Y are different, however their means are same.
The diagrammatic representation of these distributions are shown below: 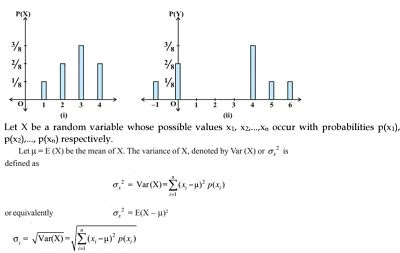 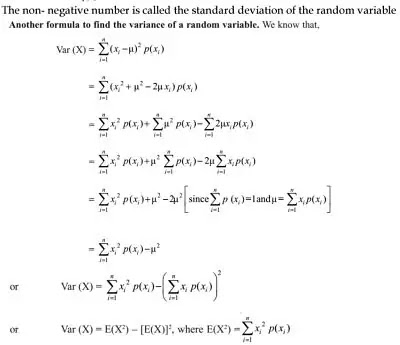 • The outcome of any trial is independent of the outcome of any other trial. In each of such trials, the probability of success or failure remains constant. Such independent trials which have only two outcomes usually referred as 'success' or 'failure' are called Bernoulli trials.

• Trials of the following conditions:
• There should be a finite number of trials.
• The trials should be independent.
• Each trial has exactly two outcomes: success or failure.
• The probability of success remains the same in each trial.
• Example: 30 Six balls are drawn successively from an urn containing 7 red and 9 black balls. Tell whether or not the trials of drawing balls are Bernoulli trials when after each draw the ball drawn is (i) replaced (ii) not replaced in the urn.