CBSE Revision Notes for CBSE Class 12 Mathematics Application of Derivatives Applications of derivatives: rate of change of bodies, increasing/decreasing functions, tangents and normals, use of derivatives in approximation, maxima and minima (first derivative test motivated geometrically and second derivative test given as a provable tool). Simple problems (that illustrate basic principles and understanding of the subject as well as real-life situations).

✳️ DERIVATIVE AS RATE OF CHANGE

An economist may want to study how the investment changes with respect to variations in interest rates.

A physician may want to know, how small changes in dosage can affect the body's response to a drug.

A physicist may want to know the rate of change of distance with respect to time.

All questions of the above type can be interpreted and represented using derivatives.

(I) The value of the derivative at P (x, y,) gives the slope of the tangent to the curve at P. Symbolically 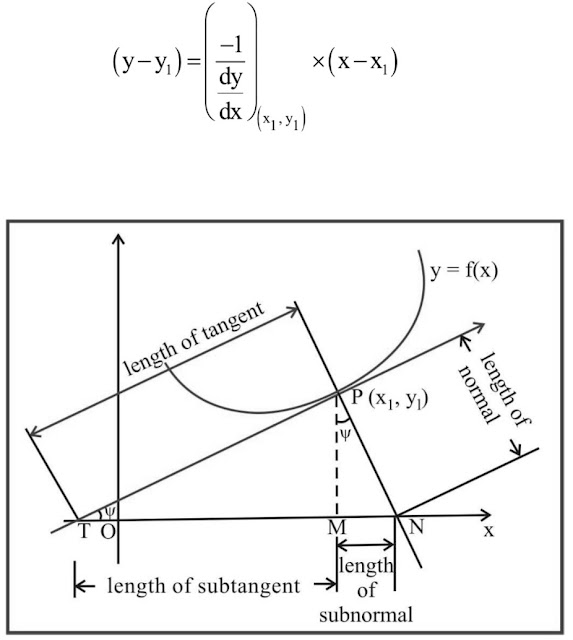 2. If the tangent at any point P on the curve is parallel to X-axis then dy/dx = 0 at the point P.

4. If the tangent at any point on the curve is equally inclined to both the axes then dy/dx +1.

5. If the tangent at any point makes equal intercept on the coordinate axes then dy/dx = +1. 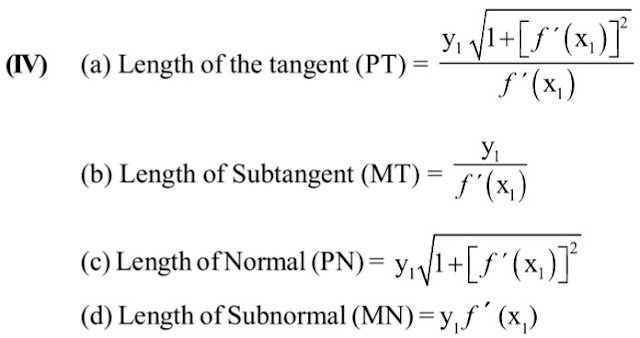 ✳️ TANGENT FROM AN EXTERNAL POINT 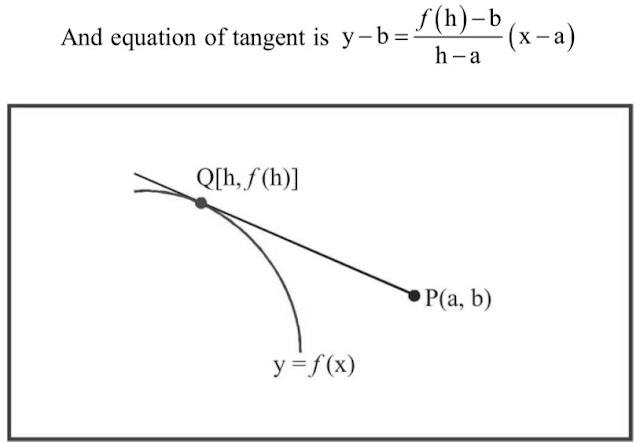 ✳️ ANGLE BETWEEN THE CURVES

Angle between two intersecting curves is defined as the acute angle between their tangents or the normals at the point of intersection of two curves. 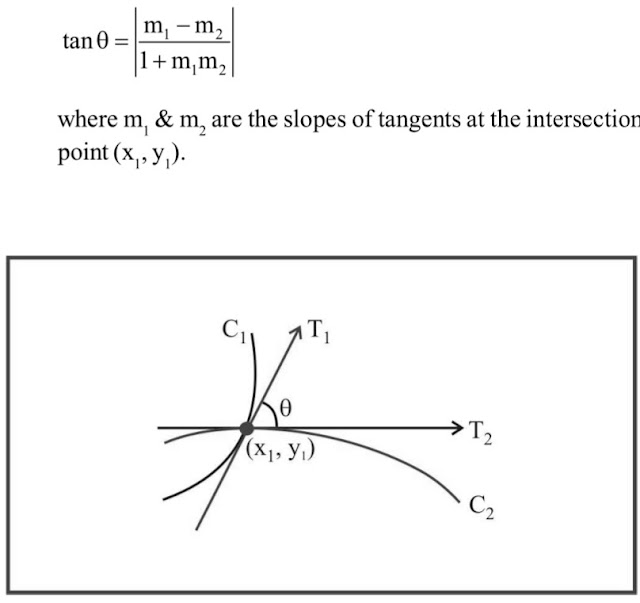 (i) The angle is defined between two curves if the curves are intersecting. This can be ensured by finding their point of intersection or by graphically.

(ii) If the curves intersect at more than one point then angle between curves is found out with respect to the point of intersection.

(iii) Two curves are said to be orthogonal if angle between them at each point of intersection is right angle i.e. m₁ m₂ =-1.

Shortest distance between two non-intersecting differentiable curves is always along their common normal. (Wherever defined) 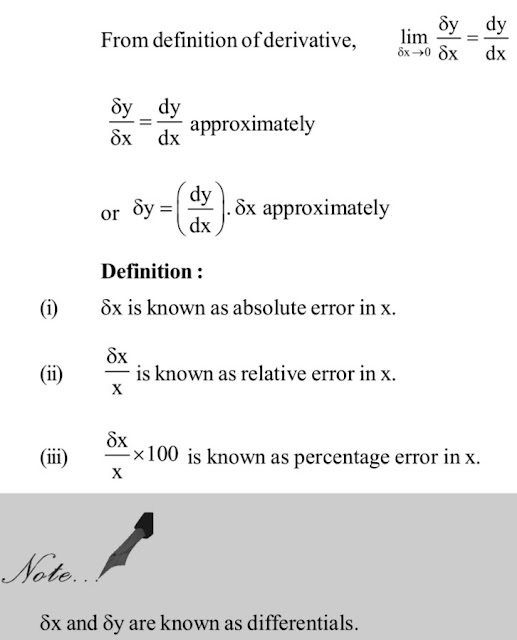 From definition of derivative, 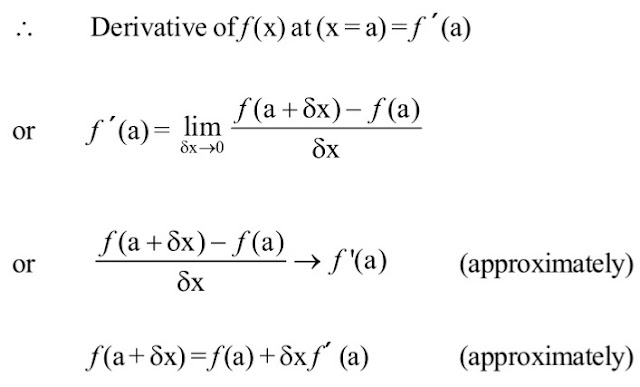 3. A function which in a given interval is increasing or decreasing is called "Monotonic" in that interval.

4. Tests for increasing and decreasing of a function at a point :

Even if f'(a) is not defined, f can still be increasing or decreasing. (Look at the cases below).

If f' (a) =0, then for x =a the function may be still increasing or it may be decreasing as shown. It has to be identified by a seperate rule.

1. If a function is invertible it has to be either increasing or decreasing.

2. If a function is continuous, the intervals in which it rises and falls may be separated by points at which its derivative fails to exist.

Let f (x) be a function of x subject to the following conditions :

(ii) f'(x) exists for every point in the open interval a<x<b.

(i) f(x) is a continuous function of x in the closed interval of a≤x≤b.

Then there exists at least one point x = c such that

Note the following: Rolles theorem is a special case of LMVT since

This interpretation of the theorem justifies the name "Mean Value" for the theorem.

Suppose a & b are two real numbers such that :

✳️ HOW MAXIMA & MINIMA ARE CLASSIFIED

1 . A function f(x) is said to have a local maximum at x =a if f(a) is greater than every other value assumed by f (x) in the immediate neighbourhood of x= a. Symbolically

for a sufficiently small positive h.

Similarly, a function f (x) is said to have a local minimum value at x=b if f(b) is least than every other value assumed by f(x) in the immediate neighbourhood at x=b. Symbolically if 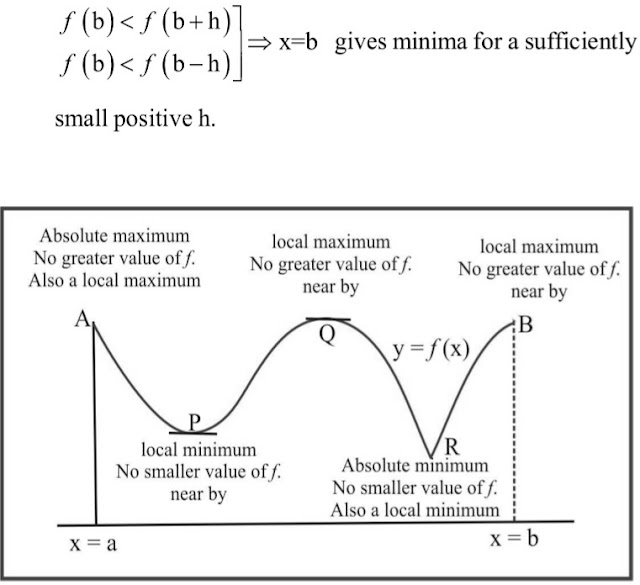 (i) The local maximum & local minimum values of a function are also known as local/relative maxima or local/relative minima as these are the greatest & least values of the function relative to some neighbourhood of the point in question.

(ii) The term 'extremum' is used both for maxima or a minima.

(iii) A local maximum (local minimum) value of a function may not be the greatest (least) value in a finite interval.

(V) Maxima & minima of a continuous function occur alternately & between two consecutive maxima there is a minima & vice versa.

A necessary condition for maxima & minima

(2) In case f' (c) does not exist f(c) may be a maxima or a minima & in this case left hand and right hand derivatives are of opposite signs.

(3) the greatest (global maxima) and the least (global minima) values of a function f in an interval [a, b] are f(a) or f(b) or are given by the values of x which are critical points.

(4) Critical points are those where: 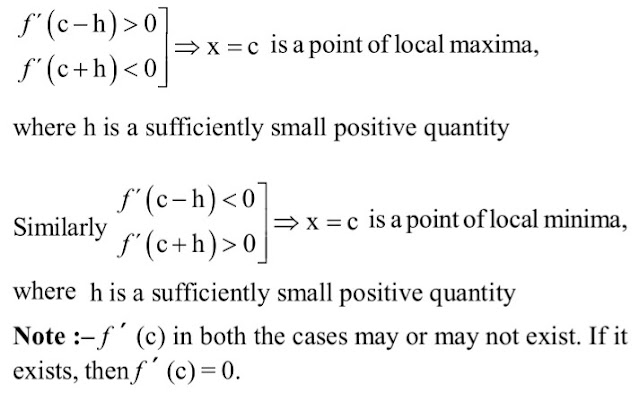 If f (x) does not change sign i.e. has the same sign in a certain complete neighbourhood of c, then f (x) is either strictly increasing or decreasing throughout this neighbourhood implying that f(c) is not an extreme value of f.

✳️ Use of second order derivative in ascertaining the maxima or minima

If f"(c) = 0 then the test fails. Revert back to the first order derivative check for ascertaining the maxima or minima.

👉 First : When possible, draw a figure to illustrate them problem & label those parts that are important in the problem. Constants & variables should be clearly distinguished.

👉 Second : Write an equation for the quantity that is to be maximised or minimised. If this quantity is denoted by 'y', it must be expressed in terms of a single independent variable x. This may require some algebraic manipulations.

👉 Fourth: Test each values of x for which f" (x)=0 to determine whether it provides a maxima or minima or neither. The usual tests are : 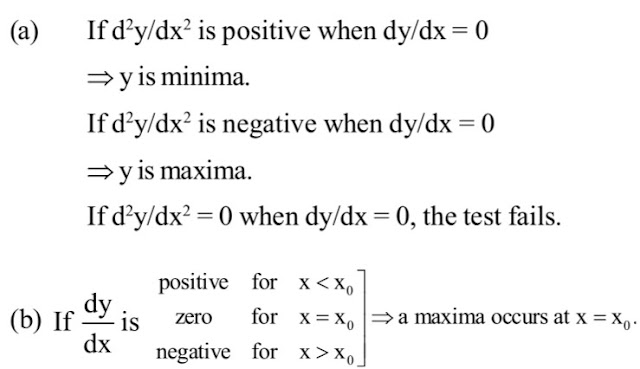 But if dy/dx changes sign from negative to zero to positive as x advances through x0, there is a minima. If dy/dx does not change sign, neither a maxima nor a minima. Such points are called INFLECTION POINTS.

👉 Sixth : If the derivative fails to exist at some point, examine this point as possible maxima or minima.

(In general, check at all Critical Points). 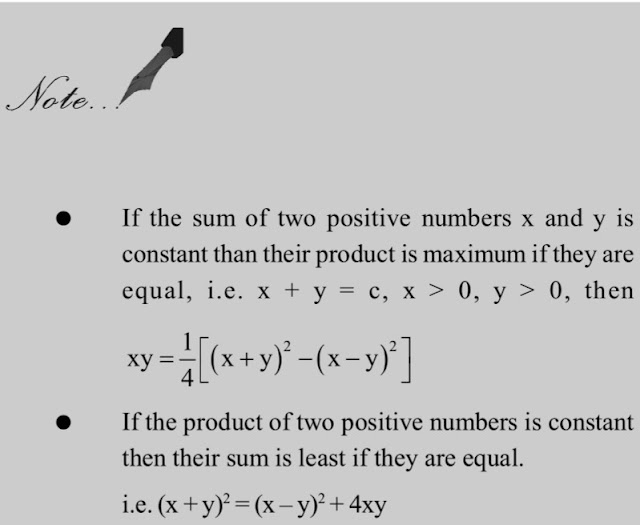 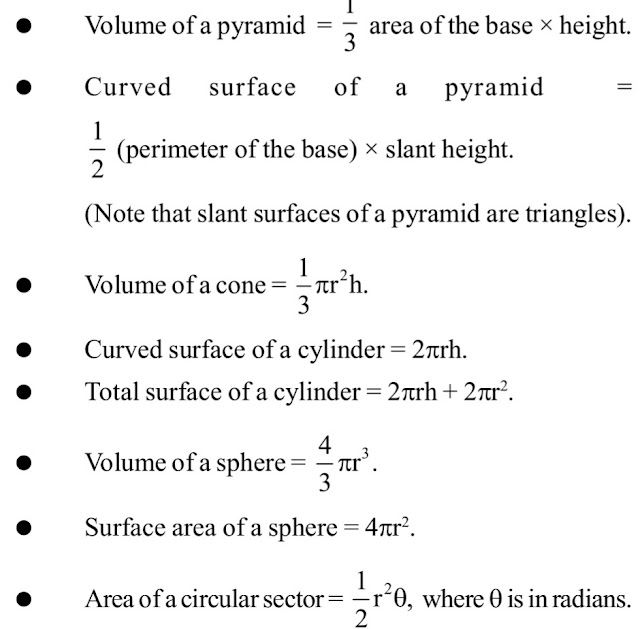 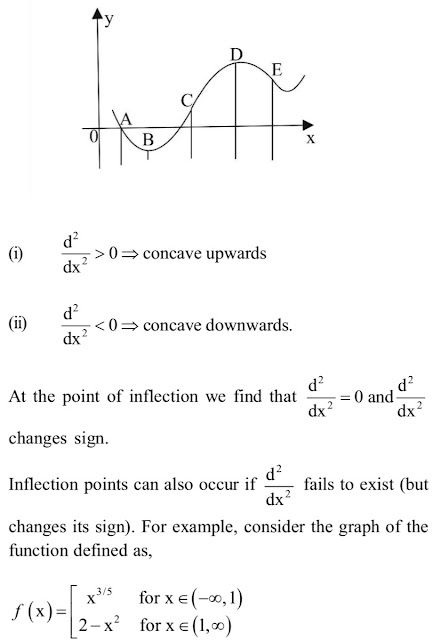 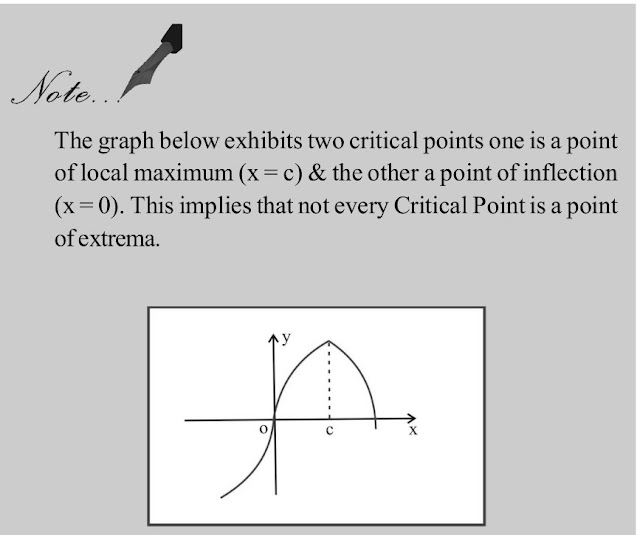