There are many stories regarding the origin of ancient games, but the written record is found from 776 B.C. The games were held in the Honour of God Zeus, and The Olympics is derived from the Lord Olympia a valley where first seen games were held.

Modem Olympic games started in 1896 with the efforts of Baron-Pierre de Coubertin of France, he is also known as the father of modern Olympics. The first Olympic games were held in Athens in 1896. Nine Countries Participated in it. Since then the Olympic games are played after every four Years. 2020 Olympic games will be held in Tokyo.

The Olympic symbol was created and designed by pierre-de-coubertin himself. He created Olympic flag which is of a milky white texture in the background with five inter linked rings of different colours. The rings symbolize the unionof five continents and meeting of the atheletes form all over the world at Olympics. The five colours are Blue, Black, Red, Yellow & Green. 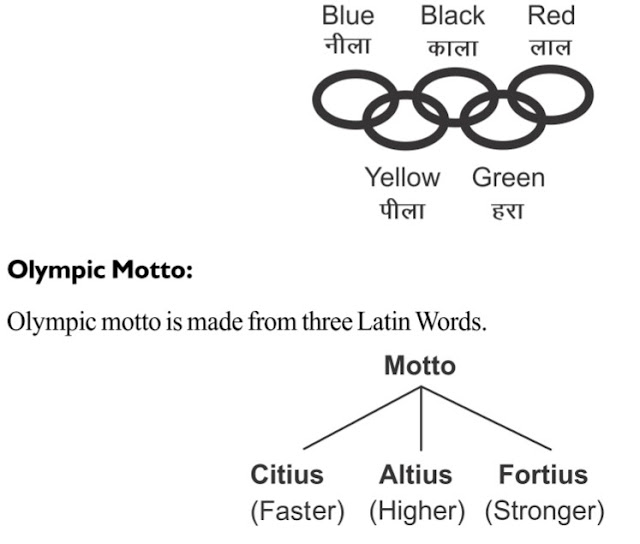 A) To generate the sense of loyalty, brother hood and team spirit among the participants.

B) To bring the attention of the world community to understand the values of the programmes of physical education.

C) To Promote amateurism among the sport men.

D) To remove the barriers of caste, creed, religion and colour.

f) To encourage moral values and unbiased behaviour through sports.

Indian Olympic Association was formed in 1927, Mr. Dorabji Tata was its first president and Dr. D.B. noehren, secretary and Sh. G.D. Sondhi as Astt. secretory. I OA is functioning and is affiliated with International Olympic Committee.

Election of Indian Olympic Association are held in four year at the annual meeting of the General Assembly to elect the council members;- President-01, Vice President, Secretary General, Treasurer and Executive Members .

To receive sports award is an honour for the sports person as well as honour for the country, to produce such a good sportsman of international caliber, there are following award for prestigious coaches and outstanding sports persons given by the Govt, of India

Dronacharya award is given to those coaches and trainers whose players are imparted coaching and training, so that they could get position at national and International Levels. So the Govt, of India started presenting Dronacharya award to the coaches in 1985 in memory to Guru Dronacharya of Mahabharata. It is presented to such famous coaches, whose teams or player's have shown good performance at International level consecutively for three yesteryears. This award carry statue of Dronacharya, scroll of honour, cash prize of 5 lakhs.

Arjuna award is the supreme honour, which is awarded to sports man by the Govt, of India. This award is given to such sport person during that year, who has been giving extraordinary performance during the past three year. This awarded was started in 1961. It is given in the memory of Arjuna of Mahabharata. These sports award carry
A) Bronze Statue of Arjuna
B)  A Certificate
c) Cash of Rs. 5 Lakhs

This award is presented for the most outstanding performance in the field o f sport and games in a year which begins from 1st april to 31 st Mareh. This award is presented to one sports person from individual sports, but it can be given to more than one person in case of team games, this award is given to the sportsmen and women of international fame and they get a medal and cash award of Rs. 7.5 lakhs.

CBSE Sports and its Organisational Setup

The aims and objectives of introduction of Chacha Nehru sports award is to identify, recognise, nurture and develop the extraordinary talent among the students studying in class VIII onwards in sports and games and students also know the importance of physical education and sports.
Labels:
11th class physical education
Share: